DOJ Wants Your DNA; Unclear Whether Projectile Saliva Donation Will Be Permitted

In August, conventioneers gathered for a good time in Denver, CO for the Democratic National Convention (DNC), and in St. Paul, MN for the Republican National Convention (RNC). But for protesters, the conventions were marred by the massive presence of police in riot gear with helicopters circling overhead, unnecessary use of excessive force, arrests of journalists, pre-emptive arrests and raids on activist offices and homes.  It will take a while for the dust to settle, lawsuits to be filed, and more information to come out about the roles played by local police, DHS, FBI, fusion centers and the tactics they employed.

Here is our initial report.

Before the convention, the city of Denver made preparations that were anything but dissent-friendly:  designation of a free speech zone to restrict protesters; police stockpiling pepper-ball rifles; restrictions on march routes for protests; and a warehouse surrounded by barbed-wire was designated as a detention center for protestors.  Obviously the city was not laying out the red carpet for people coming to exercise their First Amendment rights outside the convention hall.  Here are a few of the problems dissenters encountered:

On the first day of the convention a small march of about 300 protestors encountered a police barricade in front of them.   When they turned around, there was a police barricade behind them as well.  They were trapped between two buildings and two police lines, with no way to escape.  For over an hour police held the protestors — along with media covering the protest and any unlucky bystanders who happened to be in the area.  No order to disperse was ever heard in the crowd, and even if it was given, as many legal observers, protesters and members of the media pointed out, there was no way to leave, since the crowd was trapped by the police! Eventually the police used pepper balls and pepper spray on the crowd, and began making arrests.   About 100 people were arrested.  Video of the incident can be seen at: http://www.dnc-plp.org/page10/page10.html

Once arrested, activists were taken to the “Temporary Arrestee Processing Site” and put into chain link pens where they awaited processing for hours.  Reports indicate that arrestees were denied the right to make a phone call, denied access to attorneys, given misinformation and more.  In addition, some of those who were exposed to pepper spray were not decontaminated.

Asa Eslocker is a producer for ABC News who was investigating the role of corporate lobbyists and high donors at the convention.  He was arrested on a public sidewalk outside a hotel in Denver that was hosting some Democratic Party functions and charged with trespassing (on a public sidewalk!), interference and failure to follow a lawful order.

The assaults on dissent in Denver look almost benign compared with the brutality of the police in St. Paul.  We’ve heard harrowing tales of excessive police force and violence against peaceful demonstrators, legal observers, journalists and medics including pepper spray, tear gas percussive grenades and very rough handling of people being taken into custody.   On Sept. 7, I-Witness Video’s Eileen Clancy described what she and other videographers had witnessed in St. Paul:

Concussion grenades, smoke bombs, CS gas (tear gas), rubber bullets and pepper spray were used to attack and herd demonstrators.  In particular, pepper spray was used excessively and indiscriminately to torment and punish demonstrators in a manner that violates widely accepted law enforcement standards.  In one instance a man was pepper-sprayed while handcuffed and then punched in the kidneys.  Peaceful demonstrators have been restrained and forced to kneel on pavement for hours after being pepper sprayed without being given medical attention.

For activists who had come to St. Paul to peacefully protest, the overall mood was one of intimidation.  I got this email from Leslie Cagan, national coordinator of United for Peace and Justice on September 3:

Over the past few days, the heavily armed and extremely large police presence in St. Paul has intimidated, harrassed and provoked people; and, in a number of instances, the police have escalated situations when they used excessive force. They have used pepper spray, including spraying at least one person just inches from her face as she was held down on the ground by several police officers. They have freely swung their extra long night sticks, pushed people around, rode horses and bicycles up against peacefully gathered groups, and surrounded people simply walking down the streets. On Tuesday evening, they used tear gas on a small group of protesters in downtown St. Paul.

We reported back in June that stories were coming out about the FBI trying to recruit people to spy on protest groups.  It looks like they were successful and a full-scale cointlepro-like operation was in effect.  For over a year, agents infiltrated and spied on at least one of the groups organizing protests at the convention, The RNC Welcoming Committee. As Sheriff of Ramsey County MN (where St. Paul is), Bob Fletcher seemed to be in charge of police operations during the conventions, and apparently before.  He explained the spy operation in a September 5 interview with Amy Goodman on Democracy Now (a nationally syndicated radio and t.v. program):

“Let’s be—let’s cut to the quick in this whole discussion. You know, our organization has been tracking the activities of anarchist organizations throughout the United States now for the past year”.

“Well, when I say we know them, we did. We followed our Welcoming Committee members to many cities around the country. We consulted with the terrorism task force in those cities. We received information, etc. But as they started arriving, we were able to identify those that were here [in St. Paul]”.

Before the convention even started, local police and federal agents staged pre-emptive raids on a pulbic meeting place and five private homes, taking away computers and stacks of political literature and flyers.  They also seized a bus that carried a travelling environmental exhibit.  FBI agents were spotted among the police forces; it is not certain at this point exactly what other federal agencies were involved.  About 100 activists were detained, questioned, photographed and released during the raids.  Six activists, considered by the county sheriff to be the ‘ringleaders’ were arrested and held on ‘probable cause’, to allow for their detention without judicial review. Since it was the start of the holiday weekend, they were held in jail without charges for 4 days.

On September 3, the six activists arrested during the raids, plus two others were charged under Minnesota’s version of the Patriot Act with criminal conspiracy to riot in furtherance of terrorism.  None of the eight are accused of committing any acts of violence or rioting (in fact, they were all in custody during the protests).  The charges are based on the accusations of paid informants who had infiltrated the activist group called the RNC Welcoming Committee.

There were reports of small groups (identified in the media as anarchists) breaking windows, slashing tires and impeding traffic.  We don’t yet know how much of the vandalism that occurred during the protests can be attributed to government-paid provocateurs — activists I spoke with witnessed some suspicious behavior, and we do have the lessons of history.

Many of those arrested on Monday were held until Wednesday night, and we heard reports of some people being taken to the outskirts of the city and dropped off instead of being released downtown.

At least 19 journalists were arrested during the RNC, most of them members of the independent media (although two were reporters from the Associated Press).  The highest profile arrest was that of Amy Goodman (host of Democracy Now).  Although she was clearly identified as press by the many credentials hanging around her neck, she was arrested when she asked officers about the arrest of her producer and photographer.  The police simply tore her credentials off her neck.

Most of the arrests took place during protests, but journalists with I-Witness Video were 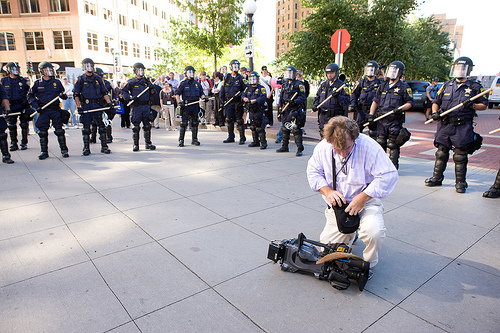 St. Paul police and the press (courtesy of Paul Park)

harassed all week.  I-Witness Video played a crucial role during the RNC in New York City in 2004, as their video recordings of those protests documented police abuse and provided evidence that cleared about 400 people arrested during the protests.  On Saturday, before the convention even began, the police raided the house where I-Witness journalists were staying, detaining everyone in the house for over two hours.  Later in the week, police raided their office, claiming that they had reports that anarchists were holding hostages there.