Wishing all a joyful New Year full of liberty, justice and peace!

As you enter the New Year, please take a minute to resolve to know your rights and responsibilities… and share what you learn with fellow dissenters. You owe it to yourself, and the people you work with.

Have a wonderful year of resistance and empowerment,

If a movement doesn’t achieve its goals, it usually isn’t because we don’t work hard enough, aren’t creative enough, don’t have enough people or resources, or because we can’t adequately identify what we’re fighting against or envision  the world we wish to create. We fail because every time we’ve started making any significant gains we’ve proven unprepared for the level of repression that would be brought down on us. This is a dominant historic pattern. If we are to have any realistic hope for winning any of our struggles, we need to greatly improve our capacity, as a movement and as individuals, to resist repression while maintaining an active and powerful offensive.

Any time people are facing state repression, they deserve the strongest possible support from rest of the movement, their families, friends and their communities in general, regardless of personal differences. As individuals, we have to be prepared to sustain resistance when we are alone, frightened, demonized and when our lives and futures are facing very real threats. When you surrender, you’re not just giving up your personal future, you’re giving up everyone’s future, and that’s unacceptable. We only know of the gains won by struggles that have come before ours because people and organizations fought hard and long, and made many difficult and painful sacrifices. Our plight is no different. 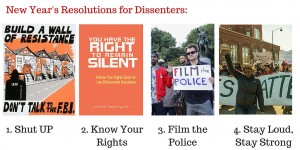 Environmentalist Leslie James Pickering tells the story of an FBI arson investigation at the headquarters of the “forest products” company, Boise Cascade. The Earth Liberation Front took responsibility for the arson, and Pickering staffed the ELF press office at the time. The story highlights how inept the FBI investigators were, but also, how people who were not involved in the arson got tangled up in the investigation and almost landed in jail, just because they unwisely and voluntarily spoke with law enforcement agents without having a lawyer present.

I may be biased, but generally, I think dedicated activists are smarter than your average law enforcement officer. But that doesn’t mean that you will come out on top in an interview with one, as Pickering’s story illustrates. Even if you have done nothing wrong and you are happy to discuss your political activity, you don’t know what information the officer or agent is after. It may not even be about you, and you may be spilling something that gets someone else in trouble. Or, you could be misunderstood, or remember something wrong and wind up being charged with giving false information.

One of my favorite stories is the break-in at the FBI office in Media, Pennsylvania in 1971. For years it was a top priority of the FBI to find out who it was who broke into the office and stole the files that exposed the massive campaign of unconstitutional spying, harassment and worse. But the FBI couldn’t figure out whodunit. Now we know it was a small group of anti-war activists who pulled it off. Betty Medsgar tells the tale in her wonderful book, The Burglary, detailing how inept the FBI was in their investigation, but the game was almost lost when one of the activists agreed to let an FBI agent into his house for a chat. He realized afterwards that if the agent had seen one of the photos of his wife (she had cased the FBI office and an FBI sketch artist had created a pretty accurate image of her), or if she had come home during the interview…. they would have been caught.

YOUR RIGHTS (courtesy the ACLU)

– You have the right to remain silent. If you wish to exercise that right, say so out loud.

– You have the right to refuse to consent to a search of yourself, your car or your home.

– If you are not under arrest, you have the right to calmly leave.

– You have the right to a lawyer if you are arrested. Ask for one immediately.

– Regardless of your immigration or citizenship status, you have constitutional rights.

– Do stay calm and be polite.

– Do not interfere with or obstruct the police. – Do not lie or give false documents.

– Do prepare yourself and your family in case you are arrested. – Do remember the details of the encounter.

– Do file a written complaint or call your local ACLU if you feel your rights have been violated.

You can download the booklet from the National Lawyers Guild, it’s available in Spanish, Urdu, Arabic and Bengal. And Steven Rosenfeld has gathered together five additional resources for protesters, you can find that here.

At BORDC/DDF, we are skeptical that police-worn body cameras will ever be the tools of accountability that supporters hope. But cell phones in the hands of the people have proven to be a powerful tool for oversight and accountability, shining a light on unjust or illegitimate police practices. Recently, that’s been especially true for protesters experiencing heavy-handed or brutal police repression.

That police don’t like this new power is quite clear, as evidenced by the many reports of police intimidation, harassment and arrests of photographers, often accompanied by the seizure and destruction of pictures and videos.

But, it is absolutely legal to film police in public in every state of the Union, a fact that many police officers either don’t understand, or choose to ignore. Of course, that doesn’t mean they won’t arrest you anyway, and illegally delete what you have recorded. Last year, Clark Stoeckley was walking through Penn Station in New York City and came across Metropolitan Transit Authority police carrying automatic weapons. He snapped their picture on his cell phone and was immediately arrested. He reports that the MTA cops told him they felt threatened by his cell phone, which, they said, could have been a phone gun. He was charged with “engaging in threatening behavior.”

More insidious perhaps than the police who arrest you for taking pictures, are the ones who don’t. Instead, your legal act of taking a picture could land you on a terror watch list without you ever knowing about it. That’s because a national initiative called “Suspicious Activity Reporting” encourages or requires police to collect information about a long list of legal activities that are considered “suspicious,” including taking pictures (either of police, other security personnel or facilities, buildings or infrastructure).

The Law is on OUR Side The law is clearly on the side of photographers, but lack of training, oversight and/or clear policies means that police continue to violate the First, Fourth and Fourteenth Amendment rights of individuals recording the police. The Department of Justice set forth specific policy recommendations in a May, 2012 guidance issued to the Baltimore, Maryland Police Department.

Join the movement for oversight and accountability and to fulfill the promise of the Bill of Rights. BORDC/DDF has resources and can provide training and support to build diverse coalition in your town, city or state to achieve transformative reform locally and nationally. Contact us at organizing@bordc.org, we’re ready to help.

Today, DRAD staff @Jewbansandwich and @CodyBlooms took your signatures to Google, demanding they take a stand for reproductive privacy in the post-Roe era. We don't usually take on private companies, but Google complies with tens of thousands of data requests from police annually

As the Senate deliberates over the National Defense Authorization Act, we urge them to leave KOSA out of must-pass legislation. Under the guise of protecting children, KOSA could add surveillance barriers to everyone using the internet and further marginalize LGBTQ communities.