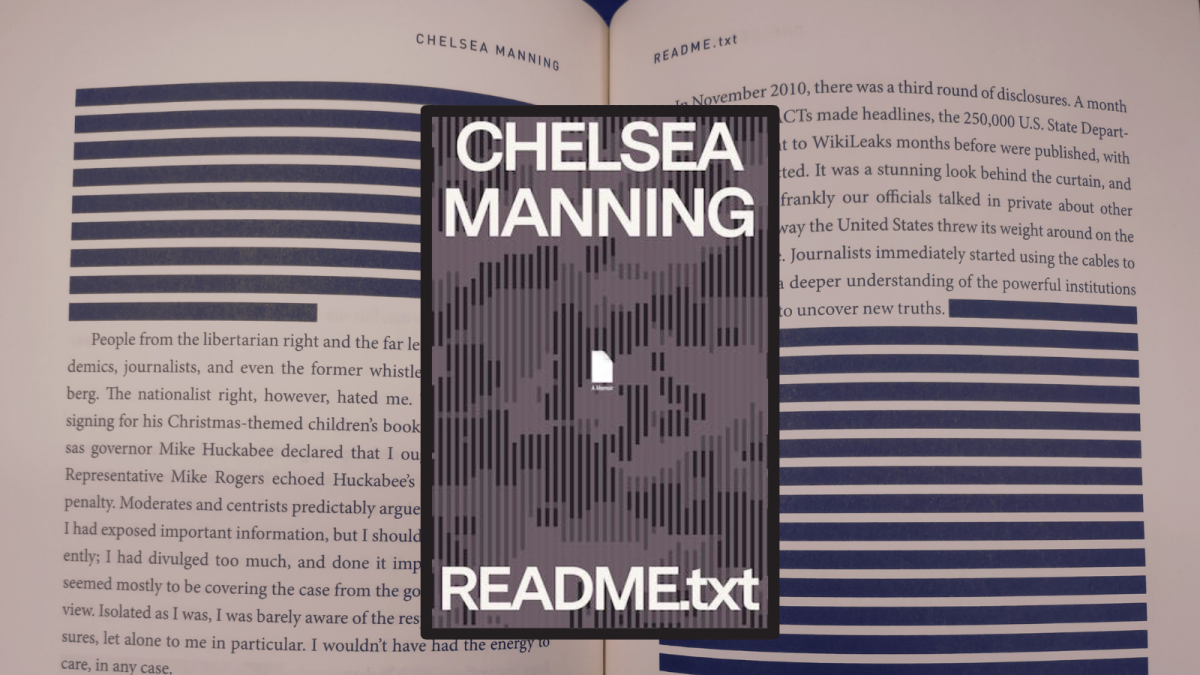 In 2010, as an Army private serving in Iraq, Chelsea Manning released hundreds of thousands of classified records shining light on the US wars in Iraq and Afghanistan. These files included the “Collateral Murder” video (which showed American soldiers gunning down Reuters journalists and Iraqi children), the Iraq and Afghanistan war logs,  and  documents revealing the inner workings of US diplomacy known as the diplomatic cables. The initial publisher of all these records was WikiLeaks. The impact of the initial publications was immediate and significant. Manning had exposed the brutality, horror and corruption of US asymmetric warfare.

So, of course, our government responded quickly, and with a sledgehammer.

Manning was arrested and held in solitary confinement in a cage in Kuwait. After two months, she was transferred to Quantico, but was still held in conditions that were, according to the UN Special Rapporteur on Torture “at a minimum cruel, inhuman and degrading treatment in violation of article 16 of the convention against torture.”  She was eventually charged with 22 counts under the Espionage Act, Computer Fraud and Abuse Act, aiding the enemy and other violations. In 2013 she was convicted of 20 of those charges, but acquitted of the most serious, aiding the enemy. She was sentenced to 35 years in military prison. Obama commuted her sentence upon leaving office and she was released in 2017. This ordeal was made even more difficult by the fact that she is a trans woman who had to fight for her right to be recognized and treated as such.

Throughout the US government’s grotesque treatment of Manning, Defending Rights & Dissent stood by her, organizing rallies, petitions, days of action and advocating on her behalf. Despite being so close to her story, we still learned a lot from Manning’s new memoir, README.txt.

Manning describes what compelled her to release those records: her long held belief in radical transparency and her history of acting as a source for journalists. We learn how, contrary to the government-led smear campaign about her, she acted responsibly, that she was a brilliant and hardworking intelligence analyst who took her job seriously and did it very well.

Manning is constrained from sharing her full story even now, by classification/overclassification of documents that could help her provide important context for her actions, and by prepublication review by the DOD, which redacted several crucial paragraphs. Nonetheless, the memoir is heartbreaking, inspiring, riveting, deeply personal, and enlightening.

While Manning was horrified by what she witnessed in Iraq, she wants her release of records to be understood as “a direct action in the service of transparency [rather] than as a symbolic action intended to secure peace…” (p. 181). She situates her actions in the context of US history. “What I did during my enlistment was an act of rebellion, of resistance, and of civil disobedience. These form a deep and important tradition in our history of forcing progress[.]” She never calls herself a whistleblower.

The Pentagon’s redactions prevent Manning from sharing what she feels are the most important takeaways from the records she released. But she shares what each set of documents broadly allowed the American people to learn.

Her take on the Collateral Murder video, which showed the killing of Iraqi civilians and two Reuters journalists was nuanced. She herself was horrified by what she saw in the video, but she also couldn’t stand the cover-up.

“This response [to a Reuters FOIA request for the video] really troubled me; they didn’t want Reuters to see what had really happened. So did the bloodlust of the American soldiers, the dehumanizing way they reacted, especially to the children and to the wounded man crawling to safety. It remind me of the cruel detachment of a kid torturing ants with a magnifying glass.” (p. 137)

But the transparency activist in Manning wanted the American people to have all the information they needed to judge for themselves. She writes:

“I uploaded the Apache video to the WLO [WikiLeaks] submission form. I included the army’s internal investigation, so there would be the proper context on what the footage was showing, what the rules of engagement were at that time, and how the army had dealt with it. I wanted the world to understand that nothing was cut-and-dried here.” (p 139)

Of the Afghan war logs, she says:

“The documents proved, unambiguously and unimpeachably, just how disastrous the war [in Afghanistan] still was.  Once revealed, the truth could not be denied or unseen: this horror, this constellation of petty vendettas with an undertow of corruption – this was the truth of the war.” (p 166)

Of the Iraq war logs:

“Still, for some Americans on the left, the most significant effect of the documents’ publication was the disenchanting revelation that Obama’s administration was, in certain concrete ways, at least as violent and secretive as the Bush administration had been. My disclosures brought to light Obama’s use of drone strikes in Yemen and the increasing restriction of the press’s access to information.” (p.174)

The diplomatic cables, she said, provided “… a stunning look behind the curtain, and showed just how frankly our officials talked in private about other countries and the way the United States threw its weight around on the international stage. Journalists immediately started using the cables to fact-check, to get a deeper understanding of the powerful institutions they covered, and to uncover new truths.” (p. 175) The remainder of the paragraph is redacted.

Manning unambiguously puts to rest the canard that her revelations put lives in danger or harmed our diplomatic relationships with other countries, quoting US government officials to that effect.

Manning’s time in prison was a rollercoaster, from intense periods of productivity including working on her own case, becoming a jailhouse lawyer, reading, and organizing the other prisoners to periods of intense despair.

On September 9, 2016, Manning went on a hunger strike to compel the Army to provide her with the gender-affirming medical care she was entitled to. She chose that day to join a national prison strike, on the anniversary of the Attica uprising. As with every other act of resistance she undertook, Manning was thoughtful and deliberative. She studied the history of prison hunger strikes, she read case law, she connected with organizers of the Pelican Bay prison hunger strike. She knew she didn’t want to undergo the horrors of forced feeding, so she signed a DNR order. After 5 days on hunger strike, Manning was promised the surgery she needed.

README.txt chronicles much more than Manning’s journey as a transparency activist. Manning writes about the full spectrum of her experiences, from her difficult childhood, period of homelessness, suicide attempts, and rape to her struggle with gender dysphoria and her determination to become the woman she knew she was.  Manning shares this, more personal side of her story openly and courageously. Like the believer in radical transparency that she is.