Color of Surveillance Delegation Takes DC By Storm, Demands Transparency and Accountability on Government Surveillance Aimed at Communities of Color

Community leaders from around the country participated in lobby visits, a Congressional briefing, and a full day conference at Georgetown Law last week as part of the Color of Surveillance delegation organized by the Center for Media Justice. They came to DC to fight against surveillance and harassment by law enforcement and intelligence agencies aimed particularly at Muslims. The delegation included National Network for Arab American Communities, Justice for Muslims Collective, Partnership for the Advancement of New Americans, Muslim Justice League, MPower Change, Palestinian Youth Movement, Young Muslim Collective, Montgomery County Civil Rights Coalition, and Stop LAPD Spying Coalition.

Additional support was provided by Color of Change, Defending Rights and Dissent, and Free Press.

The Congressional Black Caucus hosted a briefing open only to members of Congress and their staff on surveillance and harassment of Black and Muslim communities and activists on July 18. The room was packed and attendees learned about the deleterious impact of the Countering Violent Extremism (CVE) program on Muslim communities, and the way Black Lives Matter activists are being monitored and harassed by local police.

The next day, many of these Muslim, Arab, and South Asian activists gave powerful presentations at the annual Color of Surveillance conference at Georgetown Law School, including a debate about the merits of CVE programs with two academics who promote CVE. Audience response at the debate indicated the community activists fighting CVE clearly won that debate. 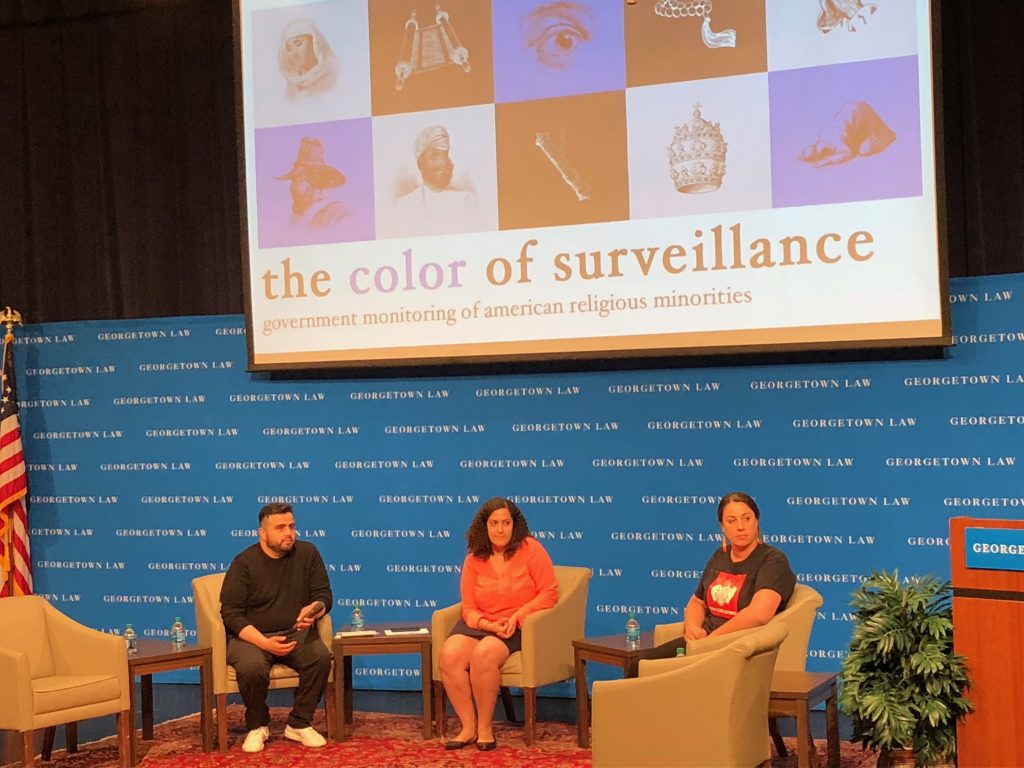 The delegation also had meetings to discuss CVE and the FBI’s Black Identity Extremist Threat Assessment with about a dozen congressional offices, including fruitful conversations with staff for Senator Warren (D-MA) and Senator Harris (D-CA).

Here are some of the highlights:

“Will you publicly oppose #CVE?”

Our #ColorOfSurveillance delegates urge @KamalaHarris’s office to take stronger actions to genuinely hear the concerns of our communities. pic.twitter.com/6Qxykmqzb9

“It criminalizes people for their identity and hurts communities’ ability to say what their needs are.” Our #ColorOfSurveillance delegate, @Ramla_Sahid of @PANASanDiego, speaks to what she sees on the front lines of organizing against #CVE. pic.twitter.com/F6lDOmBmWv

“We’ve lived with the trauma of surveillance and the mistrust and fear that it’s built in our community.” – @aberkawas of @takeonhate, part of our #ColorofSurveillance delegation that met with Congressional offices today pic.twitter.com/KX0jmlLo6q

During a meeting with @RepJeffries office this morning, our #ColorOfSurveillance delegate @kifahshah of @MPower_Change explained the way #CVE and other racist surveillance programs sow mistrust and tear apart Muslim communities. pic.twitter.com/RnB5hGMYAu

For DOJ's assurances to reporters to mean anything, Assange needs to be free.

Biden's Countering Domestic Terrorism Strategy is concerningly vague. It cites "growing perceptions of government overreach related to legal or policy changes and disruptions" as a factor increasing the likelihood of violence. So, criticizing policy?

Spoiler Alert: This report from @BrennanCenter brilliantly annihilates every argument in support of CVE and exposes the fraud of radicalization theory and the dangers inherent in the myth of predictive policing.

New @BrennanCenter report urges the Biden administration to end DHS's violence prevention programs and reject the framework underpinning them. these programs are centered in its National Strategy for Countering Domestic Terrorism, released yesterday.