Happy FBI Burglary Day: Celebrating the Citizens Commission to Investigate the FBI and the Demise of COINTELPRO

Fannie Lou Hamer saw the worst of white supremacy. She experienced physical violence multiple times, witnessed a lynching as a young child, and lost access to her job and family. Hamer organized tirelessly against the legal and extralegal systems that prevented Black people from voting and running for office.

Often, civil rights leaders were highly educated. Fannie Lou Hamer was not, at least in the formal sense. She dropped out of school in sixth grade to work on the plantation she and her family lived on as sharecroppers. Hamer lived in the insular world of work on the plantation and was unaware she had the right to vote until she was 44 years old when she attended a 1962 Student Non-Violent Coordinating Committee (SNCC) meeting. With the support of SNCC, she organized seventeen volunteers to register to vote. The group encountered armed white men outside the voting registrar’s office. Upon attempting to register to vote, the group was presented with a literacy test.

Literacy tests were a common instrument of voter suppression in the South. Tests ranged from civics trivia to complex puzzles. Louisiana’s test required, among other things,  drawing of complex shapes from written instructions, writing down a palindromic word from memory, and completing number series. In Mississippi, Hamer was asked to complete a literacy test that required her to copy down and interpret a proctor-chosen section of the Mississippi Constitution. The test proctor assigned Hamer a section on ex post facto laws. Hamer later recalled the absurdity of the literacy tests, saying “I knowed as much about a facto law as a horse knows about Christmas Day.” Hamer failed the literacy test twice before eventually passing it. This personal experience made clear to her the systemic barriers enacted to prevent Black people from generating electoral power.

Hamer suffered immediate consequences from defying white supremacy by registering to vote as a Black woman. On the way back, her voter registration cohort was stopped by police and fined because their bus was “too yellow.” When she returned home, her family’s landlord told her that if didn’t withdraw her voter registration, she would be fired from her job and forced to leave. She left the plantation and never returned. A few days later, white people shot sixteen bullets into the home where Hamer was staying. Hamer refused to be silenced, saying “the only thing they could do was to kill me, and it seemed like they’d been trying to do that a little bit at a time since I could remember.”

In 1963, white supremacy came for Hamer yet again. On her way back from a SNCC organizing meeting, Hamer and other Black women stopped to eat at a bus station in Mississippi, where they led a sit-in at a whites-only lunch counter. Police shoved Hamer’s companions into patrol cars and kicked Hamer. At the jail, wardens forced two Black prisoners to beat Hamer. Hamer sustained permanent injuries from the beating, including kidney damage, leg damage, and a blood clot in her eye that made her partially blind in one eye. 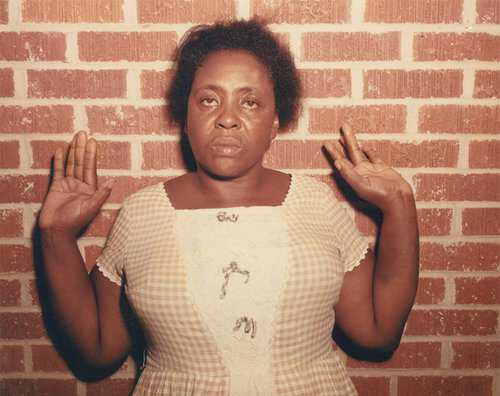 Following this incident of police violence, the FBI stepped in with a heavy-handed investigation to be conducted “with or without [victims’] consent.” At the time, most Black organizers were aware of the FBI’s track record of suppressing civil rights organizing through intrusively surveiling organizing meetings. Hamer understood this, but chose to cooperate with the FBI investigation to ensure there was a paper trail documenting her injuries. In FBI photographs, Hamer stares straight into the camera, holding her bruised arms in front of her. The FBI did little more than document however. The officers were brought into federal courts and acquitted on all charges. The FBI began to surveil Hamer as a potential threat. The FBI tracked Hamer’s engagement with groups it groundlessly defined as hate groups,  including the Republic of New Africa, anti-Vietnam war protest organizations, and communist activist groups.

Undaunted, Hamer continued organizing with SNCC and other civil rights organizations. In 1964, she co-founded the Mississippi Freedom Democratic Party (MFDP). At the time, the Mississippi Democratic Party refused to support Black candidates for office and refused to include Black people on delegations to conventions, despite Black people comprising nearly a fifth of Mississippi’s population. Hamer called out the hypocrisy of a democratic organization that excluded large numbers of its constituents. She pushed for mandatory integration of delegations to the Democratic National Convention.

Hamer ran for Congress on a platform of political equality and economic equity. She ran against a white incumbent and was blocked from appearing on the ballot by the Mississippi Democratic Party. In response, the MFDP organized mock election events with “Freedom Vote Ballots” that included Hamer. The purpose of the initiative was to show that, in the absence of intimidation of voters and suppression of Black candidates, Black people would turn out in strong numbers to vote. Over sixty thousand Black people voted for Hamer on the mock ballots.

The MFDP held conventions across Mississippi to elect an integrated delegation to challenge the Mississippi Democratic Party’s all-white delegation’s claim to sole representation of the state. Hamer argued MFDP’s case in front of the Credentials Committee at the Democratic National Convention. In an effort to divert attention away from Hamer, President Johnson called a press conference at the White House that conflicted with Hamer’s speech. Regardless, most major news networks covered Hamer’s speech, and she gained a broad national audience only to be denied seating for the MFDP by the Credentials Committee. Hubert Humphrey said President Johnson would not allow one of the seats to go to Hamer on the grounds that “he will not let that illiterate woman speak on the floor of the Democratic convention.” The DNC offered the MFDP two at-large seats out of a delegation of 64. Hamer denounced the tokenizing gesture, saying “we didn’t come all this way for no two seats.”

In 1968, Hamer started several economic programs to help Black families. Hamer grew up in a sharecropping family and was fired exercising her political rights. She could see clearly how closely political freedom was linked with economic independence. After the end of slavery following the Civil War, the U.S. had failed to follow through on General William T. Sherman’s promise of giving “40 acres and a mile” to formerly enslaved people. Instead, President Andrew Johnson ordered the lands returned to previous (white) owners. The fallout of wrenching a means of independent subsistence from newly freed Black people included development of a system of sharecropping, where Black families would rent land to farm, borrowing against that year’s harvest. High interest rates and arbitrary rules often kept sharecroppers trapped in a cycle of debt, and gave landlords a high degree of power over their tenants. Seeking to break this cycle of indebtedness that constrained political participation for many people, Hamer created a “pig bank” to supply Black farmers with pigs, advocated for low income housing to be built, and built the Freedom Farm Cooperative, where Black people could collectively own farmland and co-op businesses. As Hamer explained,  “where a couple of years ago, white people were shooting at Negroes trying to register [to vote],  now they say, ‘go ahead and register – then you’ll starve.” Hamer developed these economic initiatives to uplift Black families and give them the economic independence needed to participate in the political system without fear of retribution from their employers.

Hamer’s brilliance as a public speaker, bravery in the face of white supremacy, and understanding of how to organize communities made her an effective civil rights advocate. Hamer saw with clear eyes the imperative of addressing both legal and extralegal barriers to political participation. She used institutional mechanisms when they served her. She documented her injuries through the FBI and advocated for MFDP representation at the DNC. But she also understood the limits of working through white supremacist systems. She took it upon herself to ensure that Black people could exercise their Constitutional rights to vote and run for office. She led sit-ins, she led voter registration drives, she created economic support systems. She spoke of the barriers facing Black peoples’ political participation plainly and poignantly. Until her death (due in part to injuries from her beating at the hands of police), she used her national platform to fundraise for civil rights organizations. She was fearless. On the topic of violence against her, she said: “I’m gonna be standing up, I’m gonna be moving forward, and if they shoot me, I’m not going to fall back, I’m going to fall 5 feet 4 inches forward.” From the day she learned she had the right to vote, Hamer was determined to make political participation possible for herself and all Black people.