FBI’s “Don’t Be a Puppet” Website Illustrates Why the Countering Violent Extremism Program is Such a Problem. Example 1: The Goat.

Marylanders Travel Across State to Advocate for Free Speech

The FBI and Occupy: The Surveillance and Suppression of Occupy Wall Street

The FBI’s new interactive, “Don’t Be A Puppet” website is a hodge-podge of pop-psychology, jumbled history, and off-kilter social analysis that teaches kids to beware of people passionate about politics or religion, or who just might be going through teen angst. It’s the latest development in the Obama Administration’s Countering Violent Extremism program, and a pretty clear example of why the program is problematic on so many levels.

The website, apparently two years in development, is aimed at young people to teach them how to avoid being swept up in “violent extremism.” As you know, politicians and government officials have been wringing their hands about ISIS’ alleged great ability to use social media to recruit young people to their cause.

This is the FBI’s answer.

It features matching games, and best of all,  a goat game. You get to be a goat scampering around colorful blocks which will explode you if you bash into them. As you cross the finish line, you will see phrases like “We must defend our traditions,” then (when you get to level 6)  “Our violent action will result in a better future.” Thus will American children learn about the “Slippery Slope to Violent Extremism.” It doesn’t quite pack the thrills of Grand Theft Auto, but it is more fun than the various pop-quizzes that make up the rest of the site. 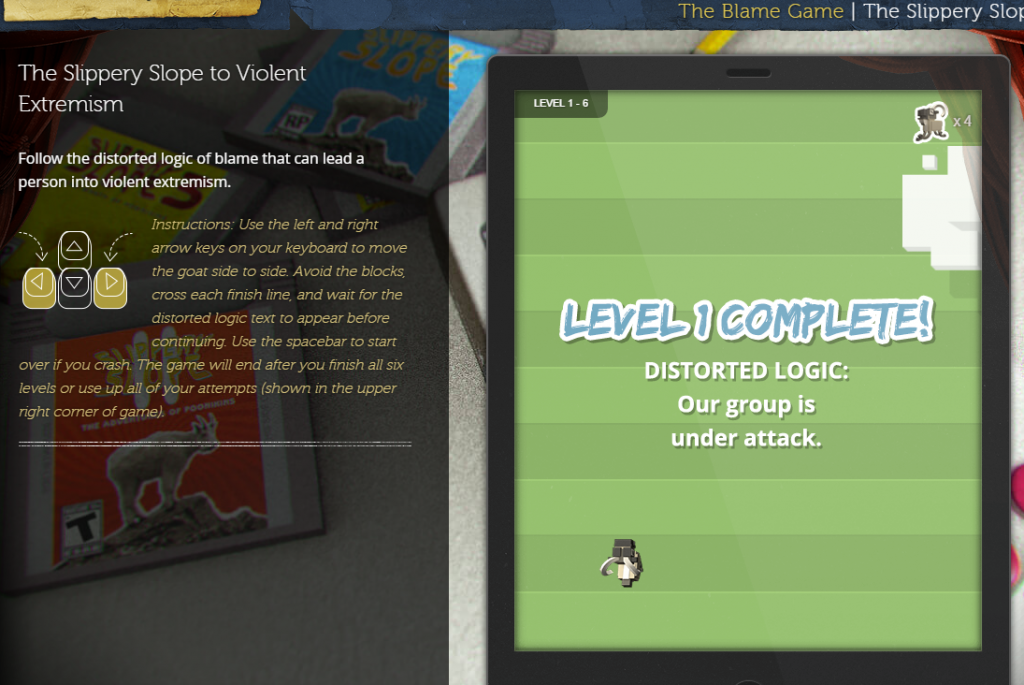 But the problem isn’t the last century graphics, it’s that the “slippery slope” narrative has been debunked over and over. In real life, people just don’t get more radical until they reach a point where they turn to violence.

It just isn’t a thing, no matter what the goat game tells tries to teach kids.

The Countering Violent Extremism program has a laudable goal: to prevent terrorist acts and to keep young people from being recruited by terrorist groups.

But since there are no reliable indicators for who will become a terrorist, CVE focuses on political and religious beliefs and practices, with a bit of pop-psychology thrown in. And the program seeks to enlist trusted community members — teachers, nurses, social workers — to monitor their students, patients and clients for potential radicalization.

It’s a toxic blend of political policing and embedded informants that targets one particular slice of the American population: Muslims, Arabs and South Asians.

To its credit, the FBI did take into consideration the objections raised by civil rights groups that the original iteration of the website promoted Islamophobia and profiling of Muslims by focusing on Islamist terrorism while ignoring other kinds of terrorism.

The game is now much more of an equal-opportunity offender — asking young people to question the motives of Puerto Rican Independentistas, abortion activists, and environmentalists, along with white supremacists and members of ISIS. 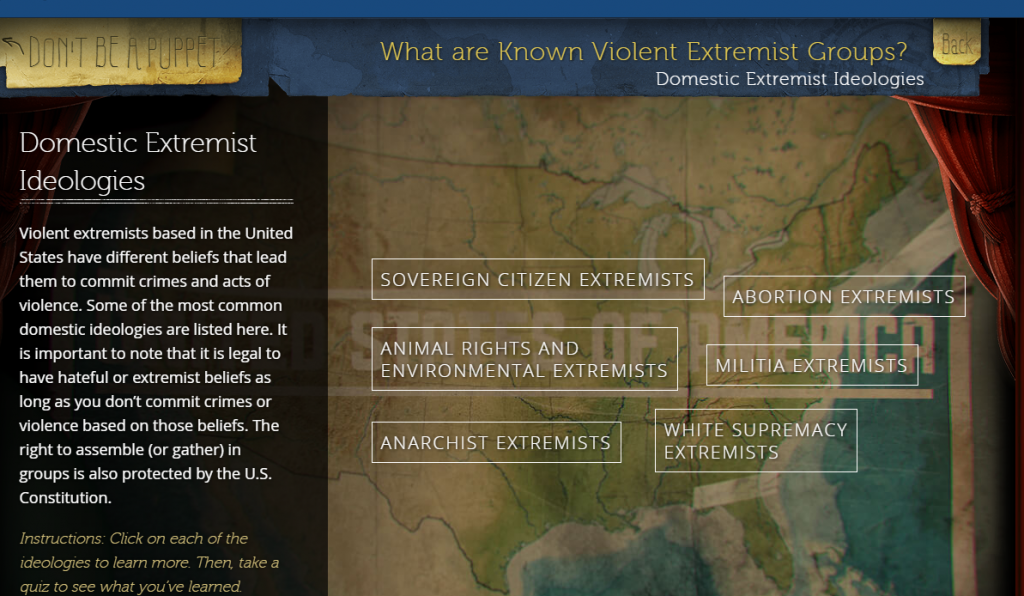 But you can tell the FBI’s heart just isn’t in it when the game turns its attention to other ideologies.

As many have pointed out, violence carried out by white supremacists in this country has a long history. But the page that defines white supremacy extremists doesn’t point to horrific crimes like Dylann Roof’s murder of nine church members in Charleston in 2015, but instead tells how “white supremacists attacked a pair of Middle Eastern men on New Year’s Eve in 2011, punching one victim in the face and head.”

Take a look at “Abortion Extremists.” Clearly the FBI was concerned that pro-life groups would take issue with being identified on the website as violent extremists, so the FBI attributes violence to both sides of the debate, claiming “Those who use violence to defend abortion rights have murdered, threatened, and attacked those who oppose abortion.” What?!?

Indeed, the FBI lobs accusations without references or footnotes. It’s the FBI, therefore it must be true?

Not quite. The FBI continues its fear-mongering in the section on Militia Extremists, citing an ominous case from 2010 where “a Michigan militia group planned to kill a police officer and later attack the parade of cars in the funeral, hoping to start a large battle. The FBI and its partners stopped them from carrying out their plan.” The problem? The case was dismissed for lack of evidence.

In fact, the crimes associated with every alleged violent extremist group group are rare, particularly compared to the overall number violent crimes in the United States. Violence is a tool, and it can be used by anyone, no matter what their political or religious persuasion, or no political or religious persuasion at all. But rather than focus on violence, the FBI, and the CVE program focus on Constitutionally-protected speech, thought and association.

And that gets us to the FBI’s very curious definition of violent extremism. It is broad, and frankly, absurd:

Violent extremism is “encouraging, condoning, justifying, or supporting the commission of a violent act to achieve political, ideological, religious, social, or economic goals.”

Apparently, committing a violent act isn’t violent extremism, but talking positively about it is.