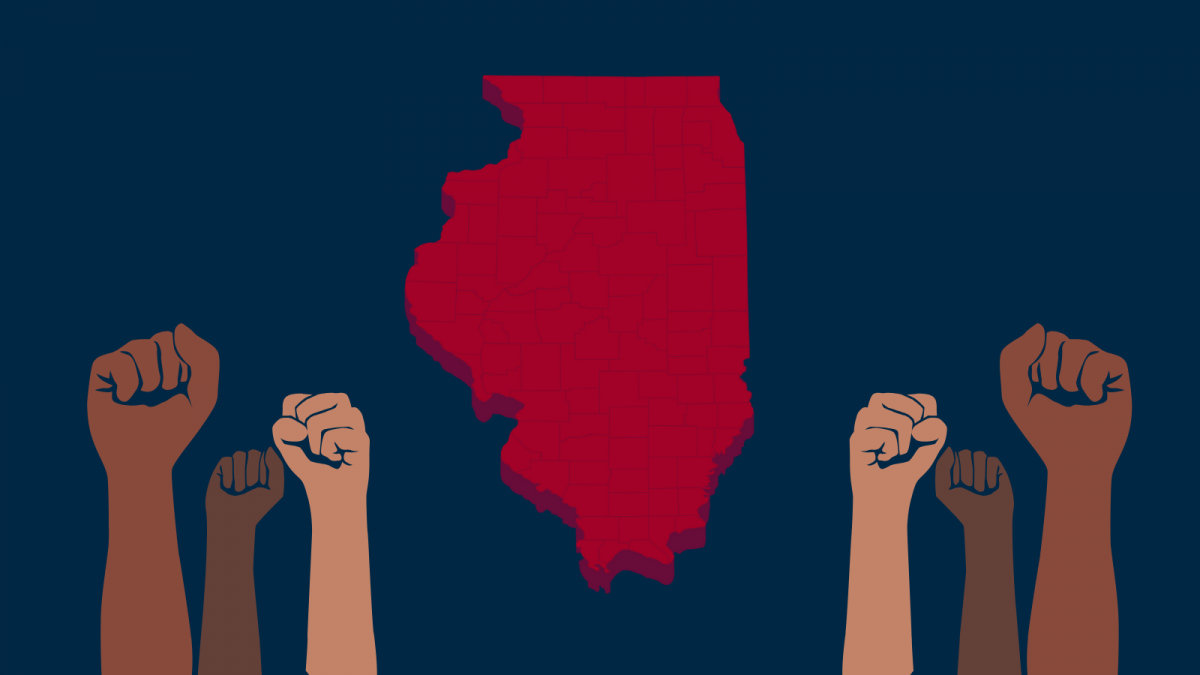 When voters went to the polls across the country for the midterms, it wasn’t just their member of Congress they were selecting. Voters also had the chance to weigh-on policy directly through ballot initiatives and referendums. Across the country, progressive, pro-worker ballot initiatives won handily in what are typically understood to be more moderate political environments. In Illinois, voters had their say on a core First Amendment-protected freedom – the right of workers to freely organize themselves and engage in collective bargaining. The vote passed, adding the proposed amendment as a section to the Bill of Rights Article of the Illinois Constitution.

Amendment 1 has modified the Illinois Constitution to stipulate that employees have a “fundamental right to organize and bargain collectively through representatives of their own choosing for the purpose of negotiating wages, hours, and working conditions, and to protect their economic welfare and safety at work.” This is a monumental win for workers in Illinois and will undoubtedly set a precedent for other states to engender similar ballot measures in the future.

Being able to form a union is a key associative right. Collective bargaining provides critical protection for workers to exercise their basic civil rights – particularly, rights of speech, association, and petition. The passage of the National Labor Relations Act (NLRA), originally enacted as the Wagner Act in 1935, guaranteed the right to organize unions and engage in collective bargaining. It was described at the time as the greatest civil liberties law in American history. It empowered workers to meet, organize, boycott, and petition, around specific issues. Defending Rights & Dissent has long supported workers’ right to organize, not only because it’s guaranteed by the Constitution, but the workers’ movement has been key to protecting and expanding civil liberties.

The measure passed handily. 58% of voters, more than 2.1 million Illinoisans, voted in favor. Excitingly, the amendment will go into effect almost immediately – per the Illinois Constitution, it must be certified and declared adopted by the State Board of Elections within 20 days of the election. The initiative was sponsored by the State Rep. Marcus Evans (D-33), supported by a large number of labor unions, as well as Gov. J.B. Pritzker. It prohibits any law that “interferes with, negates, or diminishes the right of employees to organize and bargain collectively,” including agreements that require union membership as a condition of employment.

This is significant because Amendment 1 codifies the right of workers to unionize in the state’s constitution, making it the fourth state constitution that, as of 2022, provides a fundamental right to collective bargaining. However, what makes Amendment 1 stand out compared to that of Hawaii, New York and Missouri, is the outright prohibition of “right-to-work” laws in the state of Illinois. This guarantees the collective agency of Illinois workers to negotiate wages, hours, working conditions, and to protect employees’ economic welfare and safety on the clock. Other constitutions do not specifically list what collective bargaining can address, which makes it easier for employers to subtly deploy union busting tactics without technically violating the law. No such loophole exists under this definition.

Moreover, “right-to-work” laws, which are in effect in at least 27 U.S. states, have historically been utilized to weaken union organizing and, in turn, diminish union density nationwide. These laws have historically been disastrous for organized labor, beginning with the Taft-Hartley Act of 1947, which included the so-called Right-to-Work in a suite of rules limiting union activity. Right-to-work laws posit that no employee can be required to join, or not join, a union, or be required to pay dues to a labor union as a condition of employment. Right-to-work laws also prohibit labor unions and employers from entering into contracts that only employ unionized workers for the jobs under the contract. This is problematic because, once a union has won its vote, employees could feasibly opt out of being a unit member and paying dues, yet still reap the benefits of collective bargaining. In other words, an employee could decide they want nothing to do with the union, yet still receive a pay raise or increased benefits that the bargaining unit fought for in negotiations, harming solidarity and weakening the union. This explicitly undercuts the power of the union, which is built on shared trust and common struggle. By carving out an option for workers to opt out of union membership, the base for union dues is diminished, thus weakening the capacity and resources of the labor union over time.This typically leads to employers punishing/purging union leaders, cutting hours of union members, and deliberately hiring and/or elevating non-union members to stifle the union’s momentum. Furthermore, it results in an expansion of economic inequality: CEOs and shareholders take home more profits while workers’ paychecks – union and nonunion alike – dwindle.

By ending this practice, Illinoisans have reaffirmed and strengthened their right to collectively bargain, bolstering the position of labor unions – which will, in turn, build the resources and capacity for unions over time to organize new shops and strengthen their representation of workers state wide. Not only will this set a positive precedent for other labor activists to push for similar initiatives in their home states, but it will inevitably strengthen the middle class. Evidence shows that the decades-long decline in unionization rates accounts for 35 percent of the falling share of middle-class workers. And with an increasingly erratic federal judiciary, we cannot depend on a national PRO Act to be passed anytime soon. Meaning, workers need to organize at the local/state level to petition for similar initiatives to be put on the ballot in future elections and work with local labor unions to ensure it passes. The state of Illinois has taken a lead role in inspiring hope for a stronger and more democratic labor force in the years to come.