Like a Brother: Snitching and the Legacy of David Greenglass

David Greenglass, whose death last summer was revealed Oct. 14, was arguably the most notorious American informer of the 20th century. He snitched on his own sister and got her electrocuted.

More accurately, he didn’t just snitch on Ethel and Julius Rosenberg, his sister and brother-in-law, he set them up. The official line is that Greenglass, by testifying that the Rosenbergs had given the secret of how to make atomic bombs to the Soviet Union, enabled the United States to punish the spies responsible for the deaths of thousands of American soldiers in the Korean War. In reality, it was Greenglass who had provided minimally important information about the bomb, but rather than be made the scapegoat, he chose to rat out his brother-in-law (who most likely was not involved in more than industrial espionage) and his sister.

Ethel Rosenberg, not involved, was prosecuted as a way to pressure her husband to confess or turn informer—and when the couple insisted they’d been framed, they were executed.

The Rosenberg case was the most extreme example of the early Cold War’s snitch culture. In the Red Scare of the late 1940s and 1950s, members of the outlawed Communist Party were not allowed to claim freedom of speech. Former members could not simply say they’d quit because of the Hitler-Stalin pact of 1939 or the party’s dogmatic and harsh internal politics, and leave it at that. They had to “name names,” to publicly denounce their former comrades, in order to purify themselves or save their asses.

This procedure was essentially an American version of the Stalinist show trials considered the embodiment of Communist evil—a public degradation ritual. The McCarthy-era repression worked, however. It largely succeeded in its goal of purging the left from the American mainstream, from labor unions, Hollywood, and education. We are still paying the price today, especially in the form of a labor movement dramatically weakened by the loss of its militant wing.

American society’s apparatus of repression still rests on an edifice of snitches, from the mass incarceration fed by the 1980s “war on drugs” to the use of informant-provocateurs in the post-9/11 era to entice and entrap loudmouthed but basically hapless Muslims into schemes that got them prosecuted as “terrorists.” The Cointelpro informant-provocateur tactics used to disrupt the ’60s left never really went away.

In 2006, I went to New Orleans with a group of New York construction workers and artists to help repair houses destroyed in the Hurricane Katrina flood. We worked under the auspices of the Common Ground Collective, led by Malik Rahim, a former New Orleans Black Panther Party activist. Common Ground was housing volunteers at St. Mary’s, a Ninth Ward Catholic school closed by the storm, and there were serious problems with theft and ostensibly political “crusty punks” using the building as a free place to stay while spending their days begging for beer and drug money. Rahim believed that the problems were the work of provocateurs. I didn’t begrudge him his paranoia—given the Panthers’ experience, it was well-earned, not exaggerated self-importance—but was skeptical. As the saying goes, “one movement crazy is worth ten provocateurs.” But one of the core members of Common Ground was Brandon Darby. 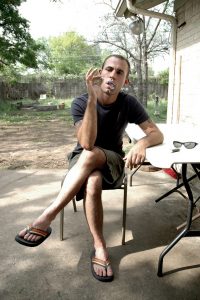 Two years later, when two young Texas activists were arrested during the Republican Convention in Minneapolis for possession of Molotov cocktails, they claimed that Darby, an FBI informant, had lured them into the plot and insinuated that they were chicken when they got reluctant. “He did everything he could to destroy St. Mary’s, which was where we were housing the majority of our volunteers, by letting a bunch of crackheads move in there,” Rahim would tell the Austin Chronicle.

One person’s “snitch” is another’s “whistleblower,” just as one person’s “terrorist” is another’s “freedom fighter.” Yet the people who denounce Edward Snowden and Chelsea Manning as “traitors” viewed the mid-’00s fad of “Stop Snitching” T-shirts as yet another a sign of the grotesque moral decay of ghetto youth. (A similar-vintage T-shirt had the Warner Brothers “WB” logo and the message, “If You See da Police, Warn a Brother.”)

Moral philosophers usually base the distinction on whether the government involved is just. Practically, the decision usually lies on the more squalid terrain of whether someone is willing to escape their fate by condemning others to it—or, as Winston Smith screamed in George Orwell’s 1984, “Do it to Julia!”

Informing involves a fundamental betrayal of those close to you, using the information gained from that closeness to get them imprisoned. That is why, for all the authoritarian dependence on it, revulsion for it pervades Western culture. Police rely on informants to make cases, but a whistleblower in their own ranks is deemed a rat.

Jewish tradition condemns the “moser,” the informer. The Talmud consigns them to eternal punishment, and the medieval philosopher Maimonides wrote that it is legally justifiable to kill them—though only to prevent them from informing, not if they’d already been indicted. And who is the most reviled person in the New Testament, the one whose shame drove him to suicide? Judas Iscariot, who betrayed Jesus to the Roman authorities for 30 pieces of silver—slightly more than $500 at today’s prices.

Obviously, this usually doesn’t happen without pressure. Communist Party members named names under the threat of imprisonment, career-wrecking dejobitation, or having personal secrets revealed. Drug suspects sought to avoid mandatory-minimum sentences of 15 or 25 years in prison—although, perversely, this practice enabled kingpins to escape such terms by turning in their underlings, who didn’t have as much information to trade. FBI “superinformant” Shahid Hussain, who framed a refugee imam and an immigrant pizzeria owner on terrorism charges and turned a Jew-hating small-time crack dealer into the ringleader of the “Newburgh Four,” did it to wiggle out of deportation and federal fraud charges—and got paid well over $150,000.

1960s comedian Lenny Bruce ridiculed those who claimed “I’d never sell my country out,” saying that if he were threatened with having white-hot lead poured “into a funnel that was inserted into his keister,” then “I would give up every top secret. I’m gonna make up secrets.” “If you can take the hot-lead enema, then you can cast the first stone,” the bit concluded. (Bruce may have been trying to justify his own behavior; he became an informant for Los Angeles police after a 1962 heroin bust.)

Those rationales do not erase the betrayal. Judas Iscariot “cast down the pieces of silver in the temple, and departed, and went and hanged himself,” the Book of Matthew says. “And the chief priests took the silver pieces, and said, ‘It is not lawful for us to put them into the treasury, because it is the price of blood.’” David Greenglass and his wife lived most of the rest of their lives under assumed names, not even telling their grandson who they really were. His death was publicized only after a New York Times reporter called the nursing home where he’d been, and learned that he’d died more than three months before.

“David Greenglass survived by trampling on the personal and political values I hold most dear,” Robert Meeropol, the Rosenbergs’ younger son, wrote in his 2003 memoir, An Execution in the Family. “Sometimes religious Jews mourn the ‘death’ of someone who has committed an unforgivable act, going so far as to sit shiva for him…. I’ve removed him from my life with similar finality. “He did not have to lie about my mother’s typing to protect his wife and children; he’d already secured them with his prior cooperation. David Greenglass sought to shorten his sentence by lying to satisfy the prosecution’s strategy of convicting my mother in order to pressure my father… his children and grandchild have suffered, not benefited, from his actions.”