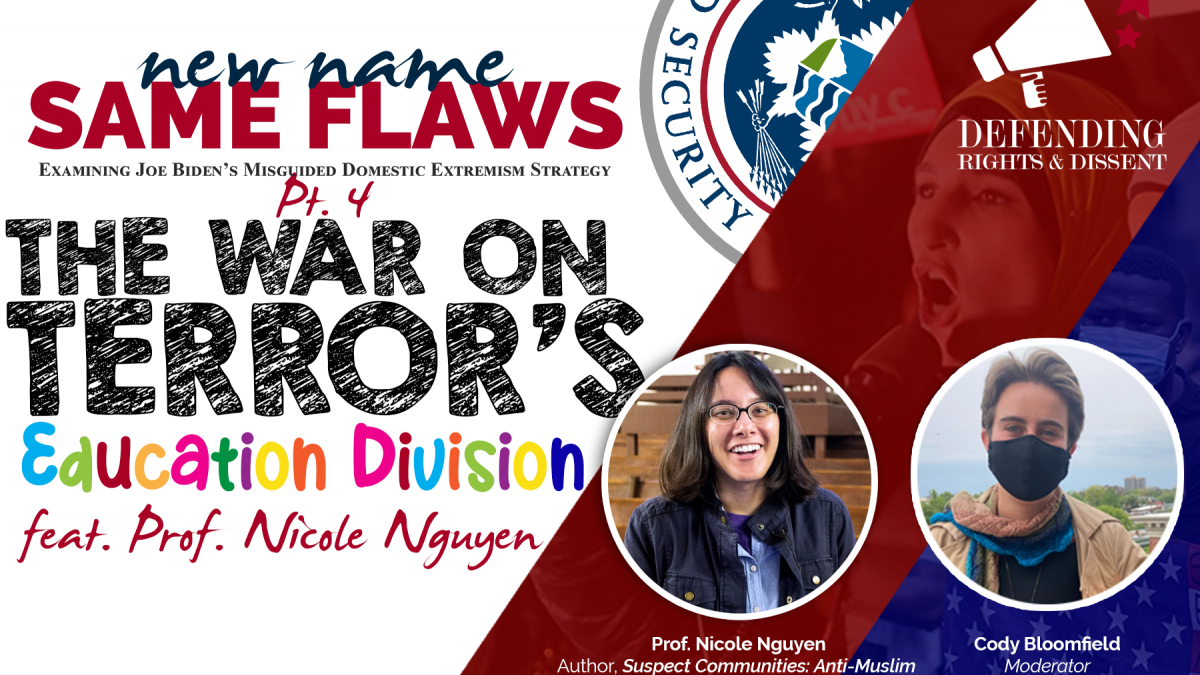 Our schools are battlegrounds. At least, that’s how DHS sees them.

Letting the national security state run rampant through schools creates what Nicole Nguyen calls “school securitization.” Students, socialized into a world of threats around every corner, learn to fear difference – especially when that difference involves Black and brown communities, Muslims, and people with mental health conditions. Terrorism cannot be treated as an ideological epidemic without fragmenting communities of color and pathologizing political dissent.

On Wednesday, August 4th,  we livestreamed the fourth event in our #LunchtimeLive series “New Name, Same Flaws: Examining Biden’s Misguided Domestic Extremism Strategy” focused on the “new” Biden counterterrorism strategy and what it means for dissent in America. Moderator Cody Bloomfield was joined by Professor Nicole Nguyen for a conversation about how counterterrorism affects schools and why the “public health approach” exacerbates systemic bias.

Nicole Nguyen is an associate professor of educational policy studies at the University of Illinois-Chicago. She is author of Suspect Communities: Anti-Muslim Racism and the Domestic War on Terror, which provides an in-depth look at countering violent extremism policies, logics, and effects, honing in on how counterterrorism policy impacts schools and students. In her research, Nicole has talked with the advocates and affected communities at the center of the CVE debate, as well as the industry stakeholders and law enforcement agencies who promote debunked radicalization theory. Drawing from her research, Nicole has become an incisive critic of CVE. On Wednesday, she shared her research and laid out the case against CVE.