Being “the first” in anything can be a challenge. In becoming the first Black American elected to Congress during the 20th century — and the son of former slaves, no less—Illinois Representative Oscar De Priest faced challenges and threats on multiple fronts. First, it was his erstwhile House colleagues, specifically long-time racists like John Rankin (D-MS) and Thomas Jefferson Busby (D-MS).

In a March 2, 1929 exchange between the two Mississippi members that excluded De Priest—who apparently was not on the House floor at the time to hear it—Busby expressed his rage that De Priest, just elected in the 1928 cycle, was getting a particular office that Busby had wanted for himself. His sense of entitlement, and his dehumanization of his House colleague, came through loud and clear in his words.

“I was led to believe that that office was to be reserved for certain other purposes,” Busby claimed. “I found later that it was proposed to put De Priest in that office, although I have served six years in Congress. I was being misled in order that this negro might be preferred over me, and I said, ‘No; you are not going to do that. I am entitled to this office over this negro, and I am going to have it.’” (Congressional Record for March 2, 1929, p. 5083).

In June 1929, racist Senator Thaddeus Caraway (D-AR) (the author of segregation legislation for D.C.) was so scandalized that President Hoover had hosted De Priest and his wife at the White House for tea that he had the Senate Clerk read the Washington Daily News article on the event into the Congressional Record. (Congressional Record, June 13, 1929, p. 2781).

Unfortunately, it wasn’t just his House and Senate colleagues who were making threats or otherwise demeaning De Priest as he fought for the civil rights of his fellow Black Americans. He got racist death threats as well. 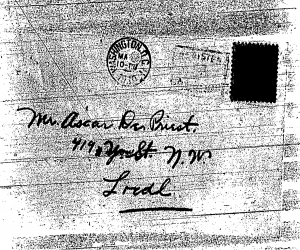 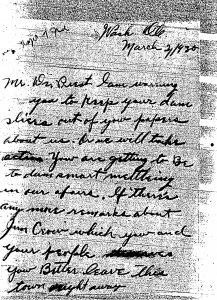 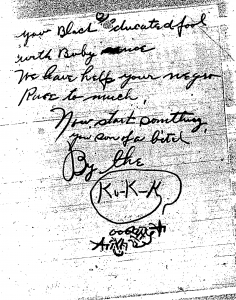 According to records released in 1979 under the Freedom of Information Act (FOIA), a year after Rankin and Busby had attacked him on the House floor, De Priest got a letter from a “Joe Stevens” (likely not the writer’s real name) in Memphis, Tennessee. The hand-written letter contained multiple spelling errors (the writer called De Priest a “Black educated fool”), told De Priest to stop attacking “Jim Crow” policies and that “You better leave this town right away” ended with “Now start something, you son of a bitch” and signed “By the KKK.”

On March 3, 1930 (the same day he received the threat letter), De Priest forwarded the correspondence to FBI Director J. Edgar Hoover, telling him “Any consideration or investigation given this matter will be appreciated by me.” Three days later, Hoover wrote back to De Priest to tell him that “Inasmuch as this matter is one coming within the jurisdiction of the postal authorities, I have taken the liberty of forwarding your communication to the Chief Post Office Inspector.” 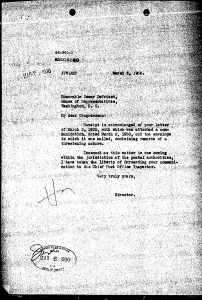 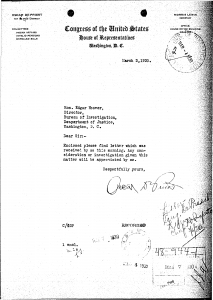 Hoover’s referral to Chief Post Office Inspector W. R. Spilman reflected indifference, not a sense of urgency that a sitting member of the House of Representatives had received a threat of violence in the mail. “There is attached hereto for your information and for such action as, in your discretion, may be deemed appropriate…” Hoover wrote Spilman, giving no indication the Bureau was paying any further attention to the threat. 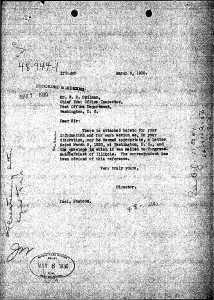 The Bureau did, however, maintain an interest in De Priest even after he left office.

The same FBI records released in 1979 under FOIA show that as late as May 1943, the Bureau was maintaining at least a press clip file on De Priest. By that point, De Priest—who had lost a 1934 reelection bid—was once again serving on the Chicago City Council (a position he held prior to his first Congressional run), still pushing for full civil rights for his fellow African Americans.


Whether the Bureau has still more unreleased material on De Priest is something I’m pursuing with my own FOIA request in my capacity as a Research Fellow at the Cato Institute. One thing remains unchanged: the civil rights work that De Priest began in Congress is more relevant and important today than ever.