We’ve Been Without PCLOB Since Before Trump Took Office. That Is A Problem

Last week, whistleblower Reality Winner was sentenced to 5 years and 3 months in prison, plus 3 years of supervised release. Her crime was releasing one 5 page document about alleged Russian hacking and attempts to spearfish U.S. election officials.

Jeff Sessions sought to make an example of her from the very beginning, as part of his effort to “ramp up” the prosecution of leaks. Reality was charged under the draconian Espionage Act, held without bail for over a year in a county jail in Georgia, her character maligned, the judge in the case repeatedly threw down roadblocks to her defense. No wonder she accepted a plea deal in June — there was no way she was going to get a fair trial.

And now she’s been given the longest sentence ever handed down by a federal court for leaking information to the media.*

But the feud between Trump and Sessions might work in her favor. Shortly after her sentencing, Trump tweeted that he thought the sentence was “so unfair”. Reality’s mom tweeted back, “Please pardon my daughter…” 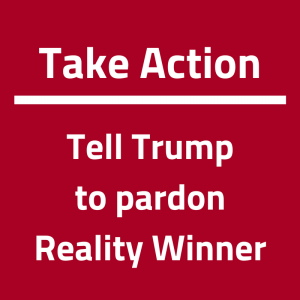 Two years ago, public pressure convinced President Obama to commute Chelsea Manning’s sentence, we need to repeat that success and end the unjust imprisonment of Reality.

While we fight for structural protections for whistleblowers, and to end the use of the Espionage Act to prosecute whistleblowers, we hope you will join us in taking action to support Reality.

* Chelsea Manning, who was sentenced to 35 years in prison, was tried in a military court.

It's Right to Know Day, an international day celebrating the right to government transparency and records.