Philadelphia PD Shopping for Security Gear Ahead of Democratic Convention

No, the FBI’s Huge Biometrics Database Should Not Be Exempt From Privacy Rules

Ohio: Your Right to Boycott is Under Attack

As the national political conventions approach, much attention has been focused on security preparations underway in Cleveland, host to the Republican National Convention in July. Citing the fractious nature of the GOP primaries and long tradition of protest, authorities in Cleveland have invested heavily in security, spending a $50 million federal grant on police equipment and moving toward purchasing riot insurance to cover the cost of lawsuits against law enforcement.

While the Democratic race has seen markedly less aggression, let alone outright violence, the authorities in Philadelphia are also preparing for potential trouble at the DNC Convention, to be held in the city in late July. Contentious scenes between supporters Clinton and Sanders supporters at state conventions – most recently in Nevada – have DNC officials on edge, and despite 16 years having passed, locals still remember the chaotic atmosphere and arrests surrounding the 2000 RNC Convention in the city.

The City of Philadelphia was eligible for the same $50 million federal grant to cover safety costs, and officials confirmed last month that the Department of Justice had awarded the city a $43,155,141 grant to cover everything “from police and fire protection to bomb squads to traffic cones to smartphone batteries.” Here’s a breakdown of how the money will be spent, based on information provided by city officials: 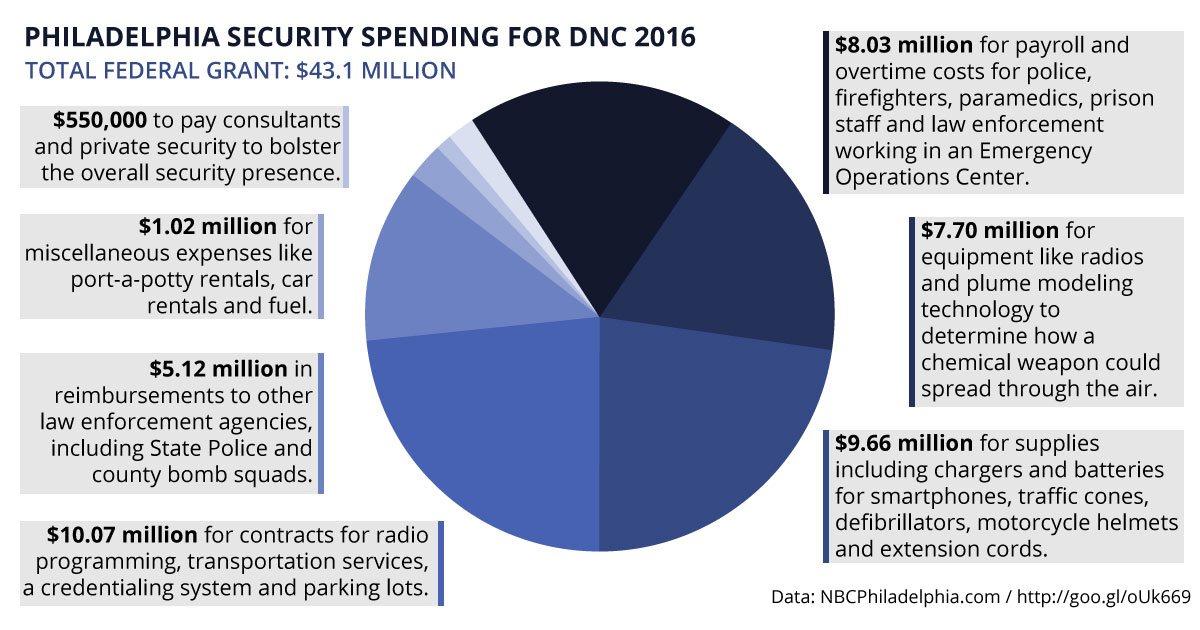 We know from experience that when cities receive this type of special funding for unusual events, the security gear they spend it on stays in town even after the politicians, protesters, and media have returned home.

An open records request under Pennsylvania’s Right-To-Know law by BORDC/DDF for documents related to the purchase of security equipment reveals the money is being spent already. A partial response to our request reveals purchases of crowd control equipment, riot gear, and irritant sprays, while other portions of the request remain unfilled at the time of writing.

Officials in Philadelphia have already started reviewing protest permit applications and say 1,000s of protesters are expected to arrive in the city before and during the Convention, with the first approval going to Food & Water Watch. The group plans to hold a “March for Clean Energy Revolution” on July 24, as thousands of Democratic delegates arrive in the city ahead of the Convention starting the following day.

Newsworks reports that another permit application from Poor People’s Economic Human Rights Campaign has been denied, although the group says they plan to march in downtown Philadelphia anyway.