Update: The FOIA Improvement Act was signed into law on June 30.

Yesterday afternoon the Senate passed a bill that would improve public access to government records and initiate reforms to the Freedom of Information Act (FOIA), labeled a broken system by open government activists. The Senate’s unanimous vote follows the passing of a similar bill in the House in January, meaning a merged bill could arrive on President Obama’s desk if differences between the two versions can be resolved.

As noted in The Hill today, the arrival of a FOIA reform bill would place the White House in a difficult position, since the Freedom of the Press Foundation recently revealed a trove of documents that demonstrate the Department of Justice’s strong opposition to the FOIA Oversight and Implementation Act of 2014 (last year’s stalled attempt at FOIA reform).

The bill was set to establish reforms including a centralized portal for requesting information from various government agencies, and removing and revising countless restrictions on what information can be requested. It would have also strengthened individuals’ rights to appeal the denial of a request for information, and require internal agency audits to determine whether the public would benefit from any information released.

The Freedom of The Press Foundation filed a lawsuit against the Department of Justice amid a swirl of suspicions that the branch had something to do with the failure of the FOIA Oversight and Implementation Act of 2014.

The bill drew unprecedented bipartisan support in the House of Representatives with a vote of 410-0, but went without a final vote at the hands of John Boehner. Some argue the Obama administration actively tried to “kill” the bill. 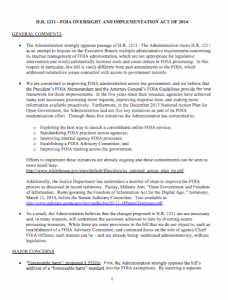 The DOJ objections to the FOIA Act of 2014

Read the full text of the documents obtained by the Freedom of the Press Foundation here.

It’s worth noting that the original FOIA “required agencies to publish their rules of procedure in the Federal Register, 5 U.S.C. § 552(a)(1)(C), and to make available for public inspection and copying their opinions, statements of policy, interpretations, and staff manuals and instructions that are not published in the Federal Register, § 552(a)(2)” and it took a legal battle just to obtain documents expressing the agency’s concerns with the legislation.

This highlights the glaring contradiction in the President’s words: “The Freedom of Information Act should be administered with a clear presumption: In the face of doubt, openness prevails.”

The Need for Reform

It’s difficult to deny the notion that the current process for obtaining information via the FOIA is problematic.

Even 20 years after the passage of the Electronic Freedom of Information Act Amendments to the FOIA, as of 2015, only 40% of government agencies have followed the law, requiring systematic information disclosure online.

Notably, the FEC refused a request for information under the basis of a FOIA exemption #5, or “inter-agency or intra-agency memoranda or letters which would not be available by law to a party other than an agency in litigation with the agency” when the documents requested were publicly available online.

But it doesn’t stop there. There is an insurmountable evidence for reform. The George Washington University National Security Archive blog is an excellent resource to find out more about FOIA reform.

In a VICE news article Department of Justice spokeswoman Beverley Lumpkin was quoted providing the following reasons for the agency’s response: “It is not uncommon for subject matter experts to provide feedback on technical aspects of proposed legislation and potential unintended consequences.”

Regardless of the agency’s defense of its position, the rampant dysfunction of the current FOIA process should have allowed the FOIA Oversight and Implementation Act of 2014 to speak for itself. Greater transparency in our government is the key to accountability, and this year’s Sunshine Week is a reminds us that an open government is good government.