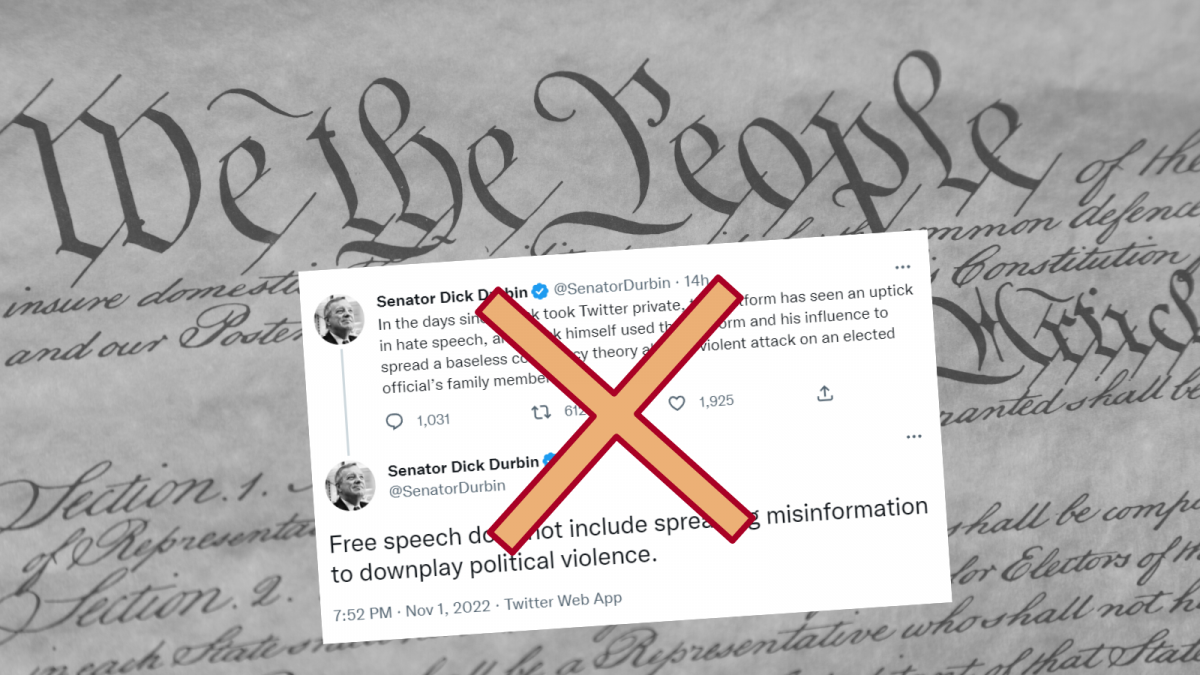 For someone heading up the Judiciary Committee, it appears Senator Dick Durbin missed out on a few key days of Constitutional Law. In his tweet, “Free speech does not include spreading misinformation to downplay political violence,” Senator Durbin strays far from the civil liberties our Constitution defends. 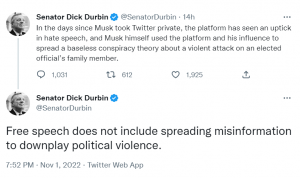 This tweet makes two claims: that free speech does not protect the spread of misinformation, and that there’s something particularly constitutionally dubious about downplaying political violence. Senator Durbin runs afoul of the First Amendment on both counts. Here’s our analysis:

The First Amendment and Misinformation

False statements do not automatically fall outside the scope of the First Amendment’s protections. Defamation is not protected by the First Amendment and the government is not powerless to prosecute perjury or fraud. But when it comes to political speech, the courts have long held the need for “breathing space.” Subjective opinions cannot be defamation and in order for one to prove defamation against a public official actual malice needs to be shown. Both prohibitions against fraud and perjury require specific intent, and fraud generally requires personal enrichment. But it’s complicated. The Supreme Court declared unconstitutional a law criminalizing lying about one’s military service, concluding that “falsity alone may not suffice to bring the speech outside the First Amendment.

In this instance, Durbin fails to define misinformation. Many definitions of misinformation mention an intent to deceive, but federal CISA publications define misinformation as “false, but not created or shared with the intention of causing harm.” False statements made unknowingly  are clearly exactly the type of “breathing room” the First Amendment protects. Furthermore, many attempts by government actors to label things “misinformation” have nothing to do with intentional falsehoods, and are merely attempts to stigmatize disfavored political views. When it comes to political beliefs, the First Amendment generally forbids the government from regulating them based on its own belief about their veracity. The government could not, for example, prohibit the nuclear disarmament movement claiming peace advocates really aren’t sincerely opposed to nuclear annihilation, but just want to weaken the US.

Why is this important to Senator Durbin’s tweets? Well, he’s talking about a baseless conspiracy theory spread by Elon Musk that Paul Pelosi was with a male prostitute at the time he was attacked with a hammer. That’s clearly false information –  and if a newspaper concocted the story from whole cloth they might be liable – but we have no evidence that Musk intended to deceive when shared that news article. Conspiracy theories can be honestly held beliefs. We can – and should – push back against misinformation, especially of the ilk shared by Musk. Setting the record straight is important. But it’s not the government’s job.

Of course, the government does engage in shadowy misdeeds. And it is often able to dismiss critics by pejoratively invoking conspiracy theories.. The history of CIA covert operations, secret projects like MKUltra, and the Watergate scandal all have the trappings of conspiracy theories. Sometimes, when time upsets many fighting faiths, it’s the official narrative that’s subordinated to the conspiratorial truth. The First Amendment protects our power to question government authority, to draw our own conclusions based on the evidence available. Evaluating the plausibility of the ideas in the public milieu is our responsibility. Otherwise we have little recourse to challenge government coverups, misstatements, and values-driven narratives. Misinformation is part of democratic discourse. To say otherwise would be to drag the United States back into the shadow of the infamous 1798 Sedition Act, criminalizing dissent under the guise of truth-testing.

The First Amendment and Political Violence

For good reason, the Supreme Court places stringent restrictions upon government attempts to restrain incendiary speech. Rambunctious rhetoric can rouse people to protest in the streets. Bombast can ignite dissent. The Supreme Court has been careful to carve out protections for, say, an anti-Vietnam War protester joking about having Lyndon B. Johnson in the sights of his rifle (Watts v. United States). Threatening but vague rhetoric falls under the First Amendment. Even a Ku Klux Klan member threatening “revengeance” after making racist and anti-Semitic comments is protected, so long as the speech isn’t “directed at inciting or producing imminent lawless action” and isn’t “likely to incite or produce such action” (Brandenburg v. Ohio). Nevermind “downplaying political violence” – only a strident incitement to political violence likely to produce such a result would fall outside the protection of the First Amendment. Musk’s tweets clearly fall short of that standard.

This high bar exists for a reason. If legal liability were incurred every time someone committed a crime downstream from political speech, dissent would disappear into a black hole of endless lawsuits. In a theoretical example, a protester leading an anti-cop chant at a Black Lives Matter rally might be held liable if a protester attacked a cop. In historical reality, before current First Amendment jurisprudence, anti-World War I protesters like Eugene Debs were prosecuted under the Espionage Act, simply because their anti-war advocacy might, theoretically, lead to listeners dodging the draft. The Supreme Court has wisely shored up its defense of the First Amendment against attempts to brandish everyday political dissent as incitement to lawless action – though, as we know from War on Terror crackdowns on material support for terrorism, alleging proximity of speech to violence remains a haunting legacy of outdated jurisprudence.

Our take? Senator Durbin clearly needs remedial Con Law 101 courses. The First Amendment defends our fundamental freedom to dissent. Misinformation is part of the messy democratic process, as is overheated political rhetoric. When the government becomes the arbiter of truth, the truth turns into a warped mirror of the government’s interests. However high the stakes, the appropriate remedy for misinformation is critical thinking and public debate, not government intervention.