In the days after Trump announced his inhumane, poorly drafted, discriminatory, and deeply unconstitutional “Muslim Ban,” tens of thousands took to the streets to declare that Muslims, refugees, and immigrants are welcome in our America. As refugees and legal permanent residents were detained at airports, stranded in a Kafkaesque limbo, unable to return home or start their new life in the US, tens of thousands of people flocked to airports to demand their freedom.

The people have spoken, But Congress must listen!

Urgent: Call your Senators now and tell them:
Support legislation to rescind Trump’s Muslim Ban
Block the vote on Jeff Sessions’ nomination until the ban is lifted

Jeff Sessions, Trump’s nominee for Attorney General, was reportedly involved in the drafting of the Muslim Ban Executive Order. With over 180 other organizations, we have written to Senator Grassley, Chair of the Senate Judiciary Committee, to urge him to hold an additional hearing to allow Senators to understand what role Sessions played in developing the Muslim Ban policy before any vote on the nominee.

Already, popular mobilizations have scored key victories against Trump’s Muslim ban. If we organize, we can win. But only if you make your voice head! 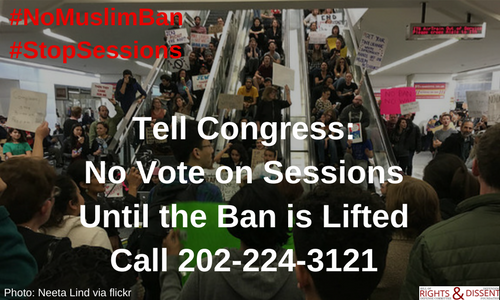 Check out our new video for highlights and updates on federal prosecutors using 'terrorism enhancements' to tack years onto the prison sentences of Dakota Access Pipeline (#DAPL) saboteurs Ruby Montoya and Jessica Reznicek.

Of the 37 remaining prisoners at Guantánamo Bay, five have never been charged with any crime and have not been recommended for release. https://newrepublic.com/article/166783/guantanamo-bay-anniversary-20-years-endless-shame?utm_medium=Social&utm_campaign=EB_TNR&utm_source=Twitter#Echobox=1659977445

3. Eliminate political policing. Spying on and subverting liberation movements has always been the primary mission of the FBI. https://www.penguinrandomhouse.com/books/188077/enemies-by-tim-weiner/