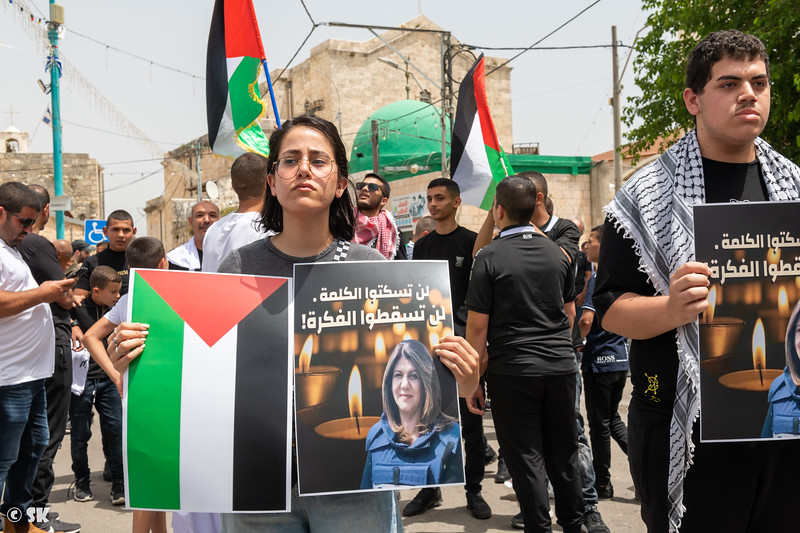 On May 11, 2022, an Israeli sniper murdered Palestinian-American journalist Shireen Abu Akleh.  The Al-Jazeera reporter was wearing a blue press vest while covering an Israeli raid on a Palestinian refugee camp in the occupied West Bank.  Abu Akleh’s family has demanded the FBI investigate the circumstances of her death. Reportedly, the Department of Justice has communicated to Israel that the FBI will investigate the journalist’s killing. In spite of being one of the largest recipients of US military aid and supposedly one of our strongest allies, Israel is not going to cooperate with the investigation.

We applaud the Department of Justice probing the death of journalist Shireen Abu Akleh. If the US is truly committed to press freedom, it cannot turn a blind eye to the death of an American journalist–or any journalist–just because a US ally is likely responsible. The US failed to hold Israel to account after the Israeli Defense Force’s killedUS activist Rachel Corrie in 2003, and again after the IDF murder in 2010 of Furkan Doğan, a Turkish American activist. On top of that, in spite of harsh words, our government has failed to hold another one of its allies, Saudi Arabia, accountable for its assassination of journalist Jamal Khashoggi. While we are pleased with this move we are cautious about its potential outcome. The US must conduct a rigorous investigation and be willing to meaningfully hold Israel accountable.

In addition to being one of the largest recipients of US military aid, Israel frequently conducts exchanges with US law enforcement. Given the Israeli government’s massacring of Palestinian protesters, Defending Rights & Dissent opposes these exchanges.