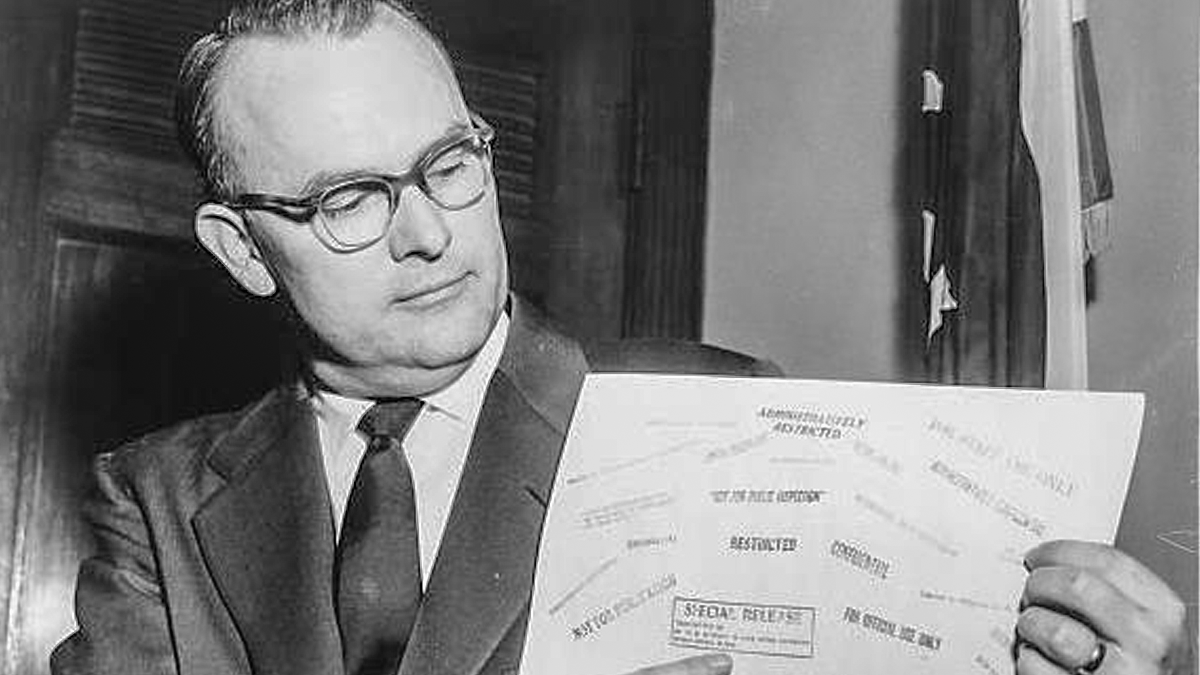 Rep. John Moss seen here showing the secrecy stamps used on government documents to keep them from being made public.

I suppose it’s only appropriate that as we celebrate another Sunshine Week that I take a moment to talk about the originator of the Freedom of Information Act (FOIA), the late Representative John Moss (D-CA). It’s particularly apropos in this case, as just this week the FBI released just over 60 pages of previously unreleased material on Moss via a Cato Institute FOIA filed in June 2019. The material covers the period from August 1957 to May 1978. Two of the FBI memos–one dated August 27, 1957, the other February 14, 1963–illustrate why Moss fought so hard to get FOIA passed by Congress.

The August 1957 FBI report describes Moss requesting a report that had been classified SECRET by the Immigration and Naturalization Service (INS), despite the fact that it dealt with taxpayer funded trips around the country for Border Patrol agents to engage in rifle and pistol matches under the rubric of “emergency war planning.” Moss persisted in his request until INS shared the clearly improperly classified report with the relevant Congressional committees.

The February 1963 FBI memo details a request by Moss, then chairman of the House Special Government Information Subcommittee, for the wartime records of the Office of Censorship. In this case, Moss had an ally in the National Archives, which argued that the records–which at that time required Presidential approval to be released–should be made available to Moss. The records included, among other things, “voluminous microfilm records of actual postal intercepts.”

It was battles like these and others with Executive branch agencies and departments that happened between 1954 and 1965 that motivated Moss to introduce the FOIA legislation in the first place. But the intransigence of those agencies and departments has never gone away. The FOIA has been amended multiple times since it went into effect in 1966, more often than not in order to try to prevent Executive branch components from subverting the law through interminable delays, unjustified redactions on a regular basis, or the frequent invocation of other statutes that allow an FBI, CIA, or NSA to withhold information that should absolutely be released.

Just over a year ago, the Government Accountability Office (GAO) released a report on those so-called FOIA exemption (b)(3) statutes and how often they are invoked. I’ll let the GAO’s executive summary paragraphs speak for themselves:

“In fiscal years 2010 through 2019, federal agencies claimed a total of 256 statutes as the basis for withholding requested information using Freedom of Information Act (FOIA) exemptions known as (b)(3) exemptions. During this time, 91 agencies reported withholding information using at least one of the 256 statutes a total of more than 525,000 times. The most-commonly used statute related to withholding records pertaining to the issuance or refusal of visas to enter the United States (8 U.S.C. § 1202(f)).

“Agencies’ use of (b)(3) exemptions more than doubled from fiscal year 2012 to fiscal year 2019 while the number of FOIA requests processed increased 32 percent. At the same time, full denials of requests based on a statutory exemption increased by 10 percent and partial denials, when an agency provided the requester with some, but not all, of the information requested, increased by 76 percent.”

Among the top offenders: DHS, CIA, and DoD–specifically NSA. Indeed, I’ve had direct experience dealing the NSA’s misuse of its own (b)(3) statute, which I’ve described as a de facto criminality shield.

This week, the Biden administration took a small step in the direction of promoting greater compliance with FOIA.

On March 15, Attorney General Merrick Garland issued a memo to the heads of all Executive branch agencies and departments directing them to “apply a presumption of openness in administering the FOIA and make clear that the Justice Department will not defend nondisclosure decisions that fail to do so” and that agencies cannot “withhold information based merely on speculative or abstract fears or fears of embarrassment.”

But there’s far less to Garland’s memo than meets the eye. It’s one thing to say the Department won’t defend bad FOIA decisions by agencies and departments. But it’s another thing to take action to deter such misconduct in the first place, or punish it once it’s exposed.

Garland included no language threatening to investigate and prosecute federal officials who misuse FOIA to conceal waste, fraud, abuse, mismanagement, misconduct, or criminal acts. Without that threat, I expect the CIA, NSA, FBI, DHS and other security-related agencies to continue to improperly classify and withhold records from the public.

Garland should also have instructed Justice Department attorneys currently defending FOIA denial decisions by federal agencies and departments to re-examine the validity of agency and department claims on the need for denials, and to mandate far higher production rates for records deemed releasable. Playing legal guerilla warfare in federal court to try to prevent disclosure of data has become an entirely too common tactic employed by Executive branch components. It needs to end.

The memo Garland issued will only be valid for as long as the current Administration is in power. What’s needed is a fundamental overhaul of FOIA that eliminates or sharply narrows existing exemptions and that makes it a federal felony for any official to misuse the classification system or administrative control caveats to conceal government wrongdoing or failures. If he were alive today, I’m certain John Moss would be appalled and outraged at how Executive branch elements have continued to try to thwart citizen-driven government transparency efforts. The best way we can honor his legacy is to pursue his objectives with the same passion and fierceness he did in life.