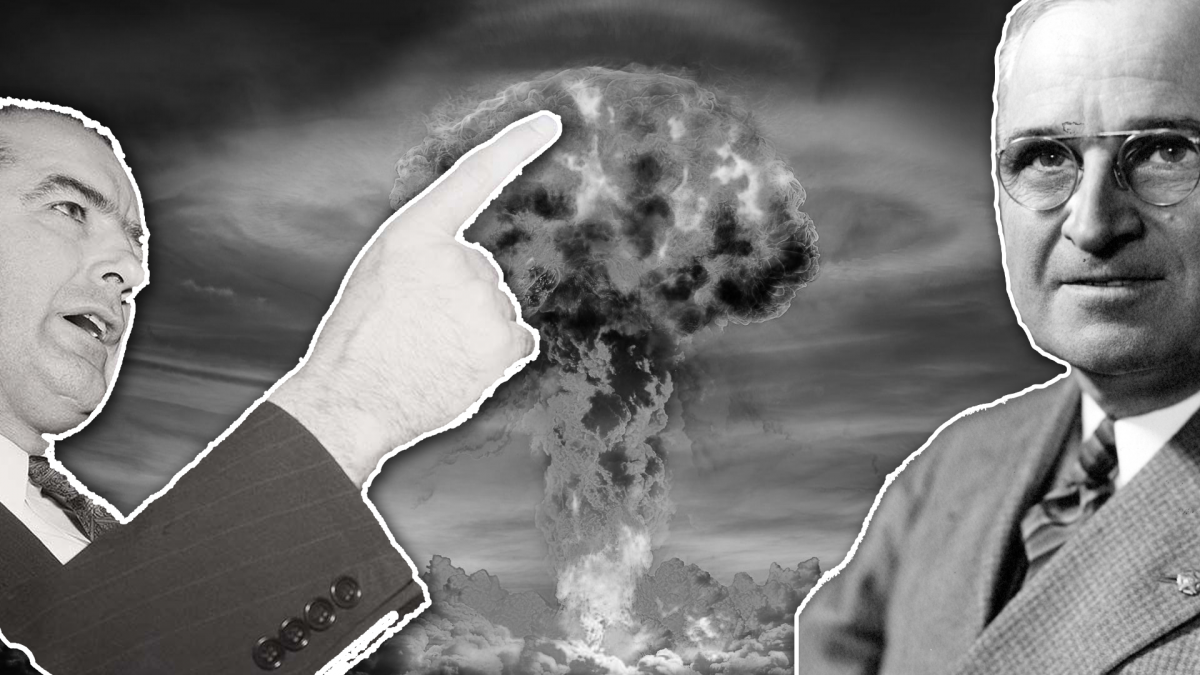 Throughout its history, the United States has repeatedly invoked the need to protect state secrets to justify undermining dissent. The Manhattan Project folded scientists deeper into the national security state. Scientists trusted with information about the nuclear program were expected to toe the national security state line. The sharpest critics of nuclear policy suffered the most suspicion. Many were treated as subversives and spies. Since World War II, the flavor of bias in investigations has shifted, but the essential form remains the same. Dissenters bear the brunt of national security state suspicion. Through formal avenues of investigation and prosecution and through incentivizing self-censorship, the national security state discredits dissidents and smothers dissent. This reached a height during the Cold War and continues into the present. The intellectual heritage of today’s xenophobic profiling of Chinese-Americans lies within the history of Cold War secrecy and repression of dissent.

The secrecy around nuclear development meant that there was only a tiny handful of people qualified to speak out on the matter. When representatives of the trusted cadre dared to speak out against the nuclear program, they were often treated as possible spies. Leo Szilard was an early target of the smear campaign leveled against dissenting scientists. Szilard was a Hungarian-American scientist and atomic bomb architect who had a change of heart once Germany surrendered. In a last-ditch effort to stop the bomb, Szilard circulated an eleventh-hour petition for nuclear scientists to urge Truman to give Japan a chance to surrender before nuking civilians. General Leslie Groves slow-walked the petition through the chain of command and prevented it from ever reaching the president. He then retaliated against scientists who signed the petition. Groves reached out to Winston Churchill’s science advisor in a perverse hope of building an Espionage Act case against Szilard. There was zero evidence that Szilard disclosed classified information, but daring to dissent alone cast him under suspicion. Szilard was a high-profile enough scientist to escape the full wrath of the national security state, but many of the lesser known petition signers faced retaliation and de facto blacklisting in the weapons industry.

Unfortunately, the insistence on enforced secrecy did not abate once the United States showed its cards in the atomic bombing of Hiroshima and Nagasaki. After World War II ended, the national security state moved quickly to restrict dissemination of nuclear information. With the McMahon Atomic Energy Act of 1946, all employees with access to restricted material were subject to an intrusive FBI background check and penalties up to and including the death penalty and life in prison if they released any restricted material. In 1949, this provision was widened to allow the FBI to run background checks on all Atomic Energy Commission researchers, regardless of whether they were working with classified material. To defeat an even more onerous bill, the McMahon Act reached an uneasy compromise where scientific dissent was suppressed in exchange for handing over control of nuclear development from the military to the civilian Atomic Energy Commission. This tradeoff proved disastrous for dissent originating within the nuclear program. Out of self-preservation, many scientists engaged in varying degrees of self censorship. Then there was the matter of McCarthyism and the House Un-American Activities Committee (HUAC). Criticizing the nuclear program was often enough to land scientists in front of HUAC, First Amendment be damned.

Nuclear scientists were uniquely qualified to commentate on the secretive and highly technical aspects of the nuclear program. So the government demanded absolute loyalty and adherence to the party line. In 1947, President Truman signed Executive Order 9835, which allowed for investigation and removal of any members of the government exhibiting symptoms of “disloyalty,” which usually meant communist leanings or vague guilt by association. Then there was the notorious matter of loyalty oaths. The University of California, a public institution and nuclear science hub, required faculty to disavow the Communist Party along with any other organization that “believes in, advocates, or teaches the overthrow of the United States Government.” Executive Order 9835 and the University of California loyalty provisions allowed the government to paint nuclear critics as subversive (along with, of course, a broad swath of left-leaning organizations). Infamously, the Atomic Energy Commission revoked Robert Oppenheimer’s security clearance one day before it was set to expire, citing Oppenheimer’s relationships with communists in the 1930s. The FBI noted that Oppenheimer served on the executive committee of the California ACLU, which was among the organizations targeted during the McCarthy era. The prospect of a career-destroying HUAC investigation hung over scientists’ heads, silencing would-be critics.

HUAC investigations were not the only incentive scientists had to avoid speaking out. The Department of Health, Education, and Welfare terminated or denied grants to 39 of the scientists it had previously supported. In some ways, this was worse than a HUAC investigation: in a Kafkaesque twist, there were no clear standards for terminating grants with no due process or opportunity for appeal. While this was in no way as serious as criminal prosecutions, it de facto excluded would-be dissidents from accessing scientific funding and institutions. Blackballing scientists seeking grant funding effectively silenced dissenters within the scientific establishment. To put it another way, the government wrested opportunity and platform away from the scientists it disagreed with, thus silencing some of the most knowledgeable critics of the nuclear program.

Alongside the history of ideological policing, there’s the story of racial profiling justified under the header of national security. In the 1940s and 1950s, the FBI took it upon themselves to investigate Chinese students who opted to return home after graduating from American universities. These investigations, though supposedly to prevent espionage, “looked more like intimidation and harassment than a search for illegal documents.” In some cases, students were detained for months by American authorities.

Throughout the 1970s and 1980s, the United States sporadically prevented various foreign scientists from doing research in American labs or attending otherwise-open scientific fora. The government policed ideology through playing games with passports and visas. Scientists perceived as posing a threat to the national security state were denied the opportunity to travel, thus constraining scientific collaboration. Unfortunately, this practice did not end when the Cold War did. In 1997, Clinton barred six Cuban scientists from attending a scientific meeting.

Since the Cold War, xenophobic profiling has taken the form of investigation and suspicion of Chinese-American/Taiwanese-American scientists. This remains true in recent decades. In 1999, Taiwanese-American scientist Wen Ho Lee was falsely accused of stealing information about the American nuclear program and giving it to China. The U.S. government knew only that China had the information, not who out of the hundreds of scientists with access to that information had given it to them. For reasons of racism alone, the U.S. government went after Lee. Lee spent nine months in solitary confinement awaiting trial. In the end, the government could only prove one of the 59 charges leveled against Lee. It later came to light that this conviction rested on faulty evidence. The government was forced to pay Lee restitution for mishandling the investigation and disclosing confidential information.

Even though Lee was not the spy, the government used the Wen Ho Lee case to justify heightened secrecy. Congress slowed declassification of documents following the Lee affair. Bush further slow-walked declassification and, in an extraordinary move, even reclassified many nuclear-related documents, including a report bolstering Marshall Islanders’ claims about the harms of nuclear testing.

As Patrick Eddington has previously written about for the Dissent Newswire, the so-called “China Initiative” continues this tradition of state-backed xenophobic suspicion cast over Chinese-American academics and employees. The China Initiative seems to proceed with little regard for evidence. Last month, an FBI agent admitted on the stand to manufacturing evidence against Anming Hu, a Chinese-Canadian professor teaching at the University of Tennessee who had been accused of espionage. Hu lost his job and faced criminal charges. Even though the FBI agent admitted to making up evidence against him, Hu faces retrial. His case is among seven cases in the last year and a half alone where the government has failed to prove its case against researchers of Chinese descent, indicating that these prosecutions rest more on profiling than predicate.

The “China Initiative” goes beyond prosecuting academics. It implicates a nefarious web of government agencies. In May of this year, a Washington Post investigation revealed a rogue counterintelligence division within the Commerce Department that searched employees’ offices and emails for mention of Chinese affiliation. The operation trawled for Chinese-language keywords, which predictably subjected Chinese-American employees to disproportionate scrutiny. A Senate Commerce Committee report found that the Commerce Department division regularly launched racially-biased investigations lacking a factual basis, which “likely resulted in preventable violations of civil liberties and other constitutional rights, as well as a gross abuse of taxpayer funds.”

The China Initiative is not specific to nuclear science, but owes its roots to Cold War paranoia and post-Cold War xenophobia. Scholar Lawrence Badash puts it plainly:

“While today’s situation is not as pervasive nor as damaging, these resemblances with the McCarthy period are enough to cause concern. In this case, those singled out, the ‘others’, have a different ethnicity; in the time of McCarthy, the ‘others’ had a hostile ideology. In both periods there is/was an intense political subtext.”

McCarthyism is now fairly universally condemned. But McCarthy’s ghost lives on in initiatives seeking to undermine scientific dissent through painting dissenting scientists as subversives. Growing up alongside anti-communist fervor was the profoundly xenophobic targeting of Chinese-Americans and other communities whose governments fell out of favor with the United States. It’s time to end ideological policing and racialized profiling writ large. When the systematic silencing of scientists takes place, the quality of democratic debate decreases. For the national security state to be accountable, we need its most knowledgeable critics. It’s long past time to stop treating scientists as spies.